Marathon Week for Passing House Bills
The House returned from a two-week recess last week to debate hundreds of bills before the deadline for consideration.  What follows are some of the more interesting pieces of legislation that passed out of the House and now go to the Senate for consideration.
HB40: Expands access to abortions for women on Medicaid.  Currently public funds cannot be used for this purpose.
HB223: Provides that identification bracelets may be used in nursing homes without a doctor’s order.  Further, nursing homes may require the use of bracelets for residents in Alzheimer’s units with the guardian’s approval.
HB261: Allows schools that are currently required to provide transportation for homeless students staying in out-of-district locations to instead provide rental or mortgage assistance for them to live within the district.  This would be an option for the district to save money.
HB302: Requires life insurance companies to pay benefits or proceeds to the appropriate persons upon the death of the insured for policies in effect since 1996.  Currently companies are only required to make payment when requested by the beneficiaries.
HB313: Extends the Nurse Practice Act to 2028, expands permissible scope of practice and relieves some restrictions upon their practice.
HB531: Creates the offense of first responder endangerment when the manager of a commercial property knowingly creates a dangerous condition and intentionally conceals it which may cause the death or serious bodily injury to a first responder.
HB607: Allows the township board of trustees in any county with less than 3 million inhabitants to abolish its road district if approved by electors of that township at a general or consolidated election.
HB698: Creates a pilot project for prison inmates within three years of release to receive training in business skills, computer skills, budgeting, creating a business plan, public speaking, and realistic goal setting.  This five-year pilot is aimed at reducing prison recidivism.
HB768: Removes provisions allowing the State Charter School Commission to reverse a local school board’s decision to deny, revoke, or not renew an application for a charter in its district.  Provides for the creation of a charter school under certain conditions.
HB2373: Makes it easier for courts to seal the records of individuals with a misdemeanor.  Such records often prevent an individual from finding work, schooling or housing.
HB2453: Provides for direct deposit of revenues from sales and use taxes into the Downstate Public Transportation Fund and thus eliminates current delays in making funds available.
HB2462:  Amends the Equal Pay Act to ensure that women and minorities are not paid less for doing the same work.  This would prevent employers from seeking an applicant’s wage and benefits history.
HB2525: Makes changes to the worker’s compensation law and provides for electronic billing but does not make changes to reduce the cost of insurance for employers.
HB2527: Allows for nonprofit organizations like Goodwill Industries of Northern Illinois to provide a program leading to a high school diploma instead of a GED for adult learners.  The proposal is modeled after a successful effort in Indiana.
HB2580: Increases the weight limits for trucks transporting grain during the fall harvest season when the Governor declares an emergencies situation.
HB2624: Creates the independent Health Insurance Rate Review Board in an effort to hold down insurance rates for consumers by ensuring that rates are reasonable and justified.
HB2764: Seeks to support Illinois manufacturing by requiring that only materials manufactured in Illinois may be sold on the property of the Illinois State Museum, in gift shops or concession areas within state parks or parkways, and on the property of State Historic Sites, and State Memorials.
HB2771: Requires most employers to provide a minimum of five paid sick days per year to employees.  Provides an exemption for the construction industry, school districts, park districts, and certain City of Chicago sister agencies.
HB2774: Provides that an operator of a commercial website or online service that collects personally identifiable information about individual customers residing in Illinois shall notify them about their personal information sharing practices.
HB2820: Directs the Department of Public Health to make uniform rules and regulations for all Farmers Markets throughout the state.  This bill is in response to complaints that local health departments’ fees and sanitation provisions are too variable and unreasonable for vendors.
HB2977: Amends the School Code to require every public elementary and high school to include cursive writing in its curriculum.
HB3163: Allows families to take a tax credit of up to $10,000 per year when they contribute to a 529-like ABLE care plan for a member with disabilities under the age of 26.  This is an expansion of the federal ABLE program approve in Illinois last year.
HB3215: Requires school districts to make feminine hygiene products available, at no cost to students, in the bathrooms of school buildings.
HB3503: Provides that cable and video providers cannot charge rental fees to customers for more than the cost of the modem.
HB3538: Provides that companies must repay all tax incentives they receive for creating jobs if they move any jobs out of the state or reduce their number of workers.  Further, these companies would be barred from any future economic incentives.
HB3691: Creates a college savings account for every child born in Illinois to encourage thoughts of higher education attainment.  Parents may add to the account.
HB3744: Requires public construction contracts to include that at least 10 percent of the man-hours performing construction services be performed by individuals who reside in areas of poverty.  The Central Management Services Agency will provide a list of areas of poverty.
HB3817: Requires that juvenile court records be sealed and never revealed to the public in order to make it easier for juveniles who have criminal records to become employed.

Budget Talks Regain Momentum
Last week Governor Rauner and Speaker Madigan met for the first time since December in a hopeful attempt to restart budget talks.  There was no statement after the meeting and other legislative leaders were not involved so the meeting at best could be described as preliminary.
Speaker Madigan did not reach out to House Republican Leader Durkin in a quest to restart budget talks so it appears that members will have to start their own talks.  In fact, several groups of bipartisan legislators from both chambers are quietly talking about budget ingredients and fanning the embers of what is left of the Senate “Grand Bargain” for revenue, spending reductions and reforms.
I have noticed an increase in feedback and pressure on legislators from residents, providers, and educators to help stimulate action.  Last week many lawmakers received letters from local school superintendents and principals pleading for action toward a budget agreement.  On Thursday, students, educators, and higher education groups gathered in the Capitol to raise their voices for funding as well.
After two full years of partial funding and no serious efforts to craft a balanced budget, I have been suggesting to anyone who would listen that it’s time we engage parents of school-age children.  If there was a serious threat that schools would not open this fall, parents would be enraged and legislators would be forced to action.  After all, parents have been kept on the sidelines during the budget impasse since schools have been mostly funded.  It’s time to stir the parents and everyone call on legislators for a full budget, now.

Action Taken to Restart Prison Nurses Talks
Late last week the Illinois Department of Corrections (IDOC) withdrew plans to fire 124 union nurses and replace them with private contractors.  The layoff was originally taken when contract negotiations with the Illinois Nursing Association (INA) broke down over efforts to cut $8 million from their budget line.
From the INA standpoint, it is believed that if more nurses were hired to adequately staff state prisons, overall staffing costs could be reduced and would prevent privatization.
While there is undoubtedly tension between the two groups, the INA has returned to the negotiation table in good faith, and is working with the IDOC to find a better solution.  Perhaps this could be a solution for the contract impasse between the American Federation of State, County, and Municipal Employees (AFSCME) and the Governor.  The courts are blocking the Governor from imposing his last and final offer so let’s restart negotiations as the administration did with the nurses.

Festivals Fuel the State’s Economy
The Illinois Municipal Review recently researched the impact that travel and tourism have upon state economies.  They found that travel is extremely important to the success of a state’s economy, especially in Illinois.  In 2015, the state welcomed 111 million visitors and tourism created jobs at a much faster rate than any other sector of the economy.  Tourism is a large power in fueling all state economies; research shows that travel is a $2.1 trillion industry.
To help promote tourism, the Illinois Office of Tourism recently launched a new campaign, “Up For Anything,” which challenges visitors to explore the unique and unexpected parts of the state.  While the state has fueled tourism through its well-known attractions like Starved Rock State Park, and the President Lincoln Historic Sites, this new campaign seeks to drive tourism a bit further through local events.
Illinois has hosted countless festivals and special events over the years which have greatly contributed to tourism.  These events attract visitors, provide opportunities to incentivize travel, and create local excitement.  The State’s 200th anniversary next year presents unique opportunities for local festivals and events tied to the state-wide celebration.  Start planning for events in your community now. 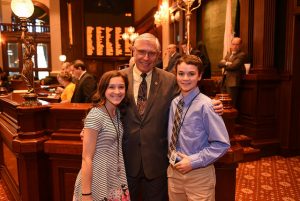 Sycamore 8th Graders Jaden Peck and Hunter Alexander served as pages for the day in the House.

Visitors in the Capitol
Last week a number of constituents visited the Capitol to share their opinions about legislation and the need for a budget.  I was pleased to welcome realtors; mayors; township and county officials; college students, staff and trustees; middle schoolers from Clinton Rosette; and citizen advocates.
You are always welcome at the Capitol!  Call my office for information and to let me know you are coming. 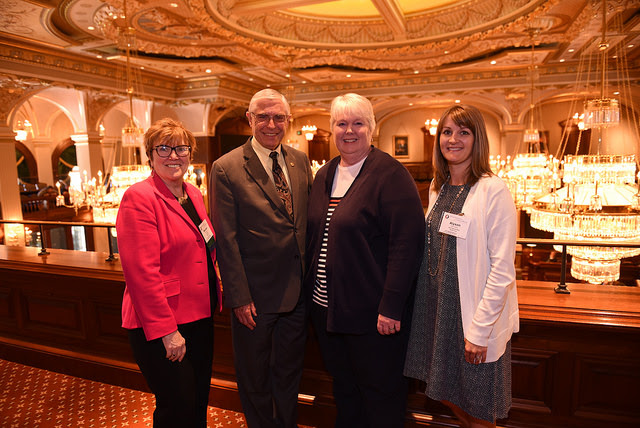 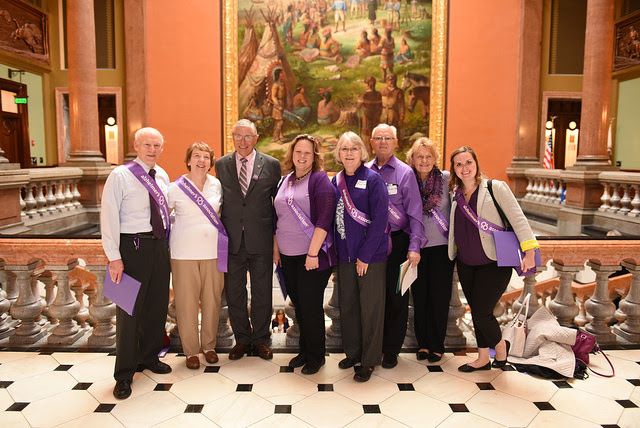