Budget Update
While it may not appear that the legislature is moving very quickly to craft a budget for FY2016, there are a number of working groups hammering out proposed reforms and items in the budget. However, that process was bypassed entirely on Wednesday morning when 16 budget amendments were unexpectedly introduced to House Bill 4141 dealing with human services. House Speaker Madigan reverted to his old style of introducing budget amendments that had not been vetted in appropriate committees where legislators and the public could read the proposals. Then within hours the amendments were called for votes. This is an example of bottom up budgeting, where you start with a list of the things you want to do and then add the costs to get the total budget. With a legislature that has an appetite for spending taxpayers’ money, this is not a method to reach a balanced budget. Most likely this was just a political message to tell the Governor that his reforms and budget cuts were not going to pass. House Republicans voted ‘Present’ to highlight this irregular and purely partisan disruption of the budget process and a waste of valuable time.

Court to Legislature: Do Your Job
The Supreme Court ruling Friday on the unconstitutionality of the 2013 public pension changes was no surprise to many. The court had given signals of its opinion in earlier rulings on health benefits. The ruling in protecting the benefits promised to workers blew a bigger hole in the FY2016 budget and slapped the hands of legislators for making promises and then not providing the funding to pay for them.

While agreeing that the pension issue was a crisis, the courts held that the legislature had other solutions to solve the funding issue and should do it in a constitutional manner. The court denied that the state could use its “police powers” in an emergency to change pension benefits protected in the constitution. In so many words, the court said if the legislature breaks the law in this instance, we cease to be a state governed by law.

Now the legislature will be forced to look at other means to address the pension underfunding which is estimated to be over $104 billion. Perhaps the parties will come together to make changes in the pension contract to protect it from bankruptcy. Perhaps the pension debt can be amortized over a longer period of time to lower annual payments. Perhaps more revenue will be raised from taxpayers to pay for the missed annual payments of the past. Perhaps other services will be cut further to make the pension payments now estimated to be a quarter of general fund spending.

These are all tough choices by themselves but certainly exacerbate the budget and policy debates between the Governor and legislature.

Worker’s Compensation Reform
One of the chief reforms promoted by the Governor, and thought to be achievable this session, are changes to reduce the cost of Illinois worker’s compensation insurance. The Speaker of the House made it clear this week that he was not in favor of any changes. He convened a ‘Committee of the Whole’ that ran over seven hours and was dominated by injured workers and people opposing any changes to our law.

Illinois’ Worker’s Compensation System was reformed back in 2011, but businesses were promised much greater savings than have actually materialized which has prompted calls for further reform. Worker Compensation is considered by businesses in and outside of Illinois to be the number one barrier to doing business here and is the seventh costliest system in the country (a drop from 3rd before the 2011 reforms).

There were seven panels of witnesses who talked about cuts to worker’s compensation in other states that aren’t even being proposed here in Illinois. Only three speakers really got to address the problems in Illinois but by that time many weary representatives had left the chambers. Many considered the hearing to be merely a political move by the Speaker to discourage any reforms and to put faces on the need for worker’s compensation.

Among the real issues we should address to our compensation system are the often lengthy process that awards damages, the unnecessarily costly litigation, and the causes for injuries. There are serious issues that need to be addressed with Illinois’ system and businesses need to be consulted while ensuring that worker’s do not lose benefits and are treated with proper compassion. More of the best practices to prevent injuries should also be incorporated at some businesses. 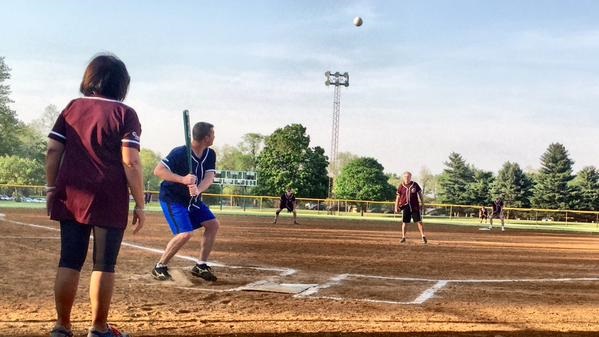 After a long session on Wednesday, the House and the Senate let off steam by playing in their annual softball game. The game was tied for a bit until the House ran away with it in the 3rd inning and never looked back. The House won the game 16-10 and took the trophy back from the Senate. The competition proved again that baseball is a young person sport.

Advice on Helping Wild Animals
Recently, a man was put on trial for taking possession of two young bald eagles against the advice of conservation officers. The case raised the question of what should citizens do when we come upon wildlife and when to be a Good Samaritan. The House passed HR367 last week to encourage the Illinois Department of Natural Resources to provide more public education on the issue and awareness for wild animal rehabilitators in the state. I cosponsored the resolution and provide some wildlife tips on my website. 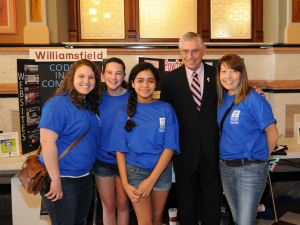 The Capitol was filled with young innovators last week as they participated in Tech 2015. Sponsored by a not-for-profit organization the event raises awareness of the critical role technology plays in preparing students to succeed in today’s world and to show the need for increased funding for classroom technology. Students from Hampshire and DeKalb were among the hundreds demonstrating different technology. Here I am learning about Powtoons from Clinton Rosette Middle School students Grace Flemming and Alondra Gamez with their teachers Katie Schnabel and Amanda Baum. Powtoons are animated video presentations used to explain steps for mathematical algorithms.

Thank you to all the Mothers who hopefully were honored this past weekend.