Unlike the stop-gap funding for higher education, the Senate bill that provided $700 million dollars in emergency appropriations to various human service providers and community based programs didn’t have bipartisan agreement. Nevertheless, SB 2038 passed the House easily and is now on the Governor’s desk.
Legislators realize the financial crisis facing human service providers who have been operating for 10 months without state funding and knew they must throw even a small life-line to keep some of them operating. The funding comes from several small accounts– not General Revenue—so bills can be paid as soon as the Governor signs the measure into law.
Typical of partisan legislation, SB2038 funds a number of “pet” organizations and programs serving strictly Chicago clientele. Program areas helped by SB 2038 are expected to get about 46 percent of the funding they would otherwise have received this fiscal year. The funded agencies and groups generally provide programs to help support mental health, homelessness, developmental disabilities, and cancer screenings.
SB 2038 is not a substitute for a constitutionally balanced budget nor does it meet some of the essential operating needs of the State like provisions for prisons, utilities and health care services. My expectation is that the partisan process used to draft SB2038 will be followed in crafting a full-year budget for FY17.

A reason for optimism that Illinois will not go a second year without passing a state budget has been a working group of bipartisan legislators and Governor’s budget staff. They have had open, civil discussions on numerous issues and framed the size of spending reductions and revenue increases needed for a balance FY17 budget.
The group submitted their findings last week to Governor Rauner and legislative leaders in what was meant to serve as a starting point for budget negotiations. While their report has not been made public, some details have been leaked to help prepare the public for the shock and magnitude of the budget solution.
The working group found that even $2.5 billion in spending cuts will be difficult because it must come from areas with the largest budgets—namely human services and Medicaid. Revenue (a.k.a. taxes) in the magnitude of $5 billion must also be a part of the equation. This reality is unavoidable since we have a mountain of unpaid bills to pay and most want to spend more on education especially for school districts without local resources and students with low incomes—which is pretty much everyone.
The legislative leaders and Governor have several paths they can take in response to the indisputable findings of the working group. The most undesirable is a political path of doing nothing, blaming the other side and waiting until after the election to face the inevitable. Voters should revolt if this path is taken and change the control of the legislature.
Another path is to craft a budget by the end of May with spending cuts, tax increases and a few logical reforms like the way we purchase supplies and services. There may be other pathways, but there are only 16 days left before any solution this year will take a super majority to pass. That is a near impossibility.

The second year of any General Assembly usually produces fewer new laws. That fact has less to do with a lack of legislative proposals and more with the focus of leaders upon crafting a budget and controlling elections. Only 33 bills have passed both chambers thus far this year, just 6 of which originated in the House.
One such bill sent to the Governor this week was SB 2173, which allows anyone who has served in the armed forces to receive a veteran designation on their state ID or driver’s license. Other notable legislation included the advancement in the House of two Senate bills to address the State’s teacher shortage.
According to a survey that was released earlier this year from Illinois’ Regional Superintendents of Education, increasing numbers of school districts are finding it hard to fill teaching positions or even find qualified candidates. This problem is greater among more rural districts. According to the survey, 60 percent of Illinois school districts responding reported trouble filling teaching positions and 75 percent of those districts are seeing fewer qualified candidates than in past years.
SB 2912 is a comprehensive bill from the Illinois State Board of Education that will address the shortage in a variety of ways, including streamlining the process to hire out-of-state applicants. SB 2908 will also help increase numbers of teachers by forgoing the registration fee for retired teachers coming back to work as substitute teachers.

Students Show off Use of Technology 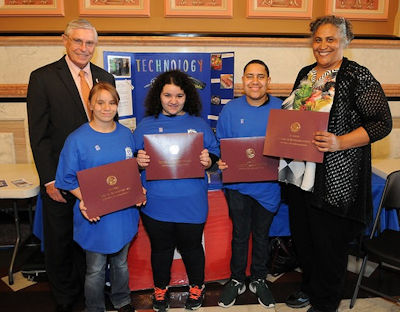 Hundreds of students converged on Springfield last week in what has grown to be the most comprehensive and diverse demonstration of class room technology in Illinois. While the purpose is to support public funding for technology needs in schools, the showcase also points out the disparity in use of technology by different school districts across the state.
Capturing lots of attention was the Rookie Cookie Crew Company from Burlington Central Middle School—sorry no samples. Math and English Language Learners embarked on an economic endeavor to make, promote, sell, and distribute cookies. They brought together common core state standards in math and writing with real life skills. The proceeds were donated to charity. 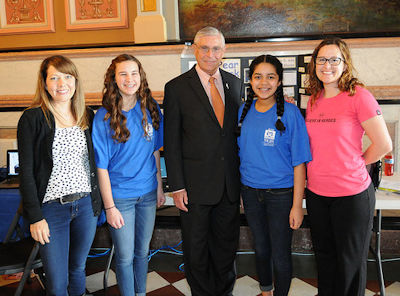 DeKalb students demonstrated use of computers in current-day classroom learning.

The eighth graders from Clinton-Rosette Middle School in DeKalb demonstrated PearDeck: an interactive computer software on their own devices. Students can view their teacher’s presentations, respond to assignments, and discuss lessons anonymously for risk-free interaction.
Congratulations to these students and teachers for great presentations and to the school districts for choosing to participate.
In other technology news across the state, the University of Illinois and Illinois State University announced an intergovernmental agreement merging their research and technology offices in a new entrepreneurship pact. The U of I system is one of the nation’s leaders in applied research and development recording 299 patent applications and 97 patents granted in fiscal year 2015.

Generally the more complex and confusing a solution; the more difficult it is to get agreement and adoption. Such is the case over changing the 1991 school funding formula which most agree is unfair, inadequate and outdated.
Senator Andy Manar has been leading one option for change for nearly two years and his legislation (SB 231) passed the Senate last week. More so than the current formula, it would take into account a district’s property wealth and student profile when allocating state education funds. Over several years Manar’s formula would shift state funding away from some schools and direct it to the districts with the most poverty and English language learners, and least local resources. As a result, few expect the House to consider the bill.
The Governor offers another proposal to take time in finding the right new formula but in the meantime fully fund the general state aid for districts. The state has not funded each district at its goal of $6,119 per student for over five years and as a result, districts have lost funding essential to educate the students with greater learning needs.
The House School Funding Formula Task Force heard details about yet another formula proposal last week for what is termed evidenced-based funding for each student’s success. It sounds wonderful and looks at best practices based upon research for staffing, teacher and student support, and local resources to improve student learning growth.
While five other states have adopted an evidenced based funding model, little is known about the results such additional funding—an estimated $5 billion for Illinois—would produce. If the current school funding formula is complex, the evidenced based model with its 27 elements and regional cost adjustments turned the task force members glassy eyed.
Don’t expect major adjustments to the school funding formula anytime soon despite the desire of many including the Senate President.

The spotlight was on purchasing reform, better known as procurement, last week in the Capitol as various agencies shared how state policies delay, confuse and add costs to their purchases of goods and services. The heads of Central Management Services, Illinois Department of Transportation and the Capital Development Board gave examples at a press conference of how the reforms after the Blagojevich corruption years have created unintended consequences and aren’t working.
The procurement code allows the four Central Purchasing Officers complete independence from the agencies they oversee, and to develop their own rules regarding procurement which often change dramatically when a new person takes over the position. As a consequence the regulations that vendors must meet are unpredictable, discourage many vendors from even bidding, and add layers of approval which delay purchases– all of which add costs unnecessarily to any purchase.
I have been working for several years to allow state procurement officers and universities to participate in multi-state purchasing groups, a common sense way to reduce the cost of purchases. Hopefully procurement reform will be included in the next budget as a way to reduce spending and avoid some of the inevitable tax increase.

Last week was Nursing Home Week and representatives from across the state were in Springfield to be honored and to ask that state funding not be cut. From personal family experience I understand that nursing homes and their staff provide an important service for individuals with physical limitations and dementia. My thanks go out to the staff and facilities in our area who are providing a very compassionate and important service. The caregivers of our loved ones have a challenging job, especially in the climate of the current budget crisis.
Illinois has 1,200 long-term care facilities serving more than 100,000 residents, from the young to the elderly. Not everyone wants or needs to move to a nursing home, but for those that do, the nursing homes—especially in our area–improve the resident’s quality of life. As a state we must find ways to offer citizens and their families choices of different levels of assistance as we all move through life.
Henry Wadsworth Longfellow wrote “The Rainy Day” poem many years ago that concluded “some days must be dark and dreary.” Today with sadness our family remembers the life of my daughter-in-law’s father, Rob Judd. We know “thy fate is the common fate of all, into each life some rain must fall.” And we rejoice that “behind the clouds is the sun still shining.”
Bob Pritchard
http://www.pritchardstaterep.org/