Don’t be Distracted
If you’ve ever attended a magic show you have experienced the art of distraction. We are seeing the same sort of “show” in Springfield this year as week after week the House is distracted from dealing with the real issues and discussion of real solutions by the consummate magician, Speaker Madigan.

This past week the Speaker choreographed a Committee of the Whole meeting that lasted nearly the entire day with testimony from victims of medical malpractice. Those testifying from other states said that caps on damages in their states didn’t allow them to receive what a judge and jury had awarded them. Incidentally, the Illinois Supreme Court ruled in 2010 that limits on damages awarded to victims of medical negligence are unconstitutional in Illinois. So what was the point?

By distracting the legislature to just think about caps on damages, there was no discussion on real solutions to lower malpractice insurance rates like limiting shopping for court venues, restricting medical expense calculations to include amounts actually paid rather than billed, and allowing defendants to spread their liability to other parties.

Not only is the Speaker directing the discussion, but he is also wearing down legislators in endless meetings and preventing debate on real legislation.

Budget Update
With just 14 days remaining before the legislature is scheduled to adjourn, we are seeing a real battle over who will shape the FY2016 budget—the Speaker of the House or the Governor. The Senate continues to watch the battle and adjourned early again on Thursday.

Battles between the Speaker and Governor are not new; Speaker Madigan has perfected his powers and control over the last 15 years as he managed two rather ineffective Governors. This is a new day and Governor Rauner has a clear fiscal goal of balancing our budget and wants to participate in the process. While he proposed an austere budget, the Governor is open to compromise on both spending levels and new revenue.

The Speaker, on the other hand, is resisting the “shared” governance model and any reductions in state spending. Each of the House Budget groups he controls will only discuss the impact of program cuts, not a prioritization for spending. He also refuses to even agree on how much revenue the state has to spend next year.

The House did debate more amendments to HB4141 last week in an effort to build a human services budget from the bottom up. It appears even this is just an exercise and not a real attempt to draft a workable budget.

House Praises Tornado Response
House Resolution 467 was approved this past week formally thanking the fire, police, and emergency medical providers from across our region who responded quickly and efficiently to the tornadoes on April 9th in Ogle and DeKalb Counties. The House further praised the efforts of individuals, businesses, organizations, and relief agencies for their generosity, supplies, and assistance in the recovery efforts.
The House recognized the Long Term Recovery Committees in each county and their efforts to help the victims rebuild and recover. Donations and prayers are still needed for these families in the weeks, months, and years ahead. 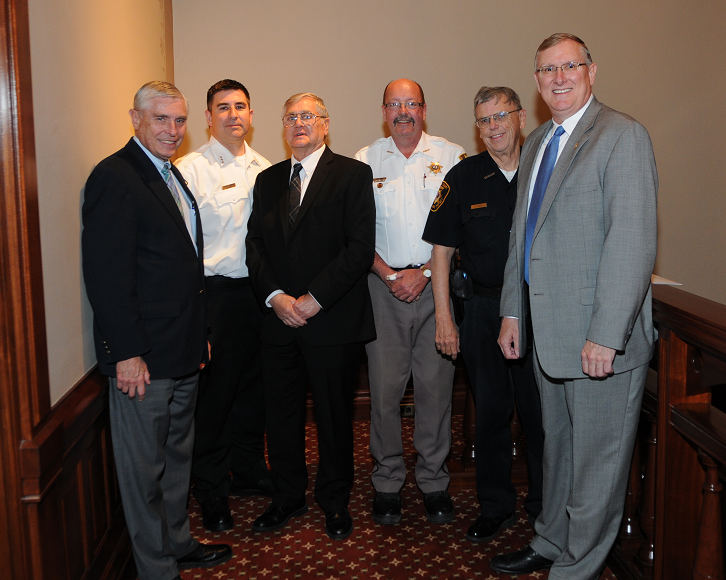 Retired Boone County Sheriff Duane Wirth (in the suit between Representative Brian Stewart and me) was recognized in the House last week for his 44 years of service and 36 as Sheriff. He is the second longest serving sheriff in Illinois and during his term saw the department grow from 12 deputies to over 100 employees, reserve volunteers and explorer scouts. Congratulations Duane!

Madigan’s Empowerment Zone Legislation Fails
Speaker Madigan filed legislation last week to allow local voters, through the petition process and referendums, to decide if they wanted to see union membership in their community become voluntary. An “empowerment zone,” would make it unlawful to condition employment on the obligation to join a union or pay union-related dues within that zone. After a long debate—with singing, chanting and weeping—the bill failed with no “yes” votes. The Governor has often spoken of allowing local areas to determine for themselves whether they would like to create such employee empowerment zones, or right to work zones, as a part of his Turnaround Agenda. He has not meant this as a stand-alone concept, and instead combined it with workers compensation reform, lawsuit reform and other tools for economic growth.

I certainly don’t question the value of unions and instead feel we should be discussing the real goal which is to create more good paying private sector jobs. This is a goal on which unions and businesses can agree. Certainly union skill training programs are state-of-the-art and they have helped greatly to improve job safety and worker productivity.

Freezing Property Taxes Not the Answer to Relief
HB695 was one of four property tax freeze bills that appeared on the House calendar last week without any real public hearing or committee debate. No one denies that government relies too much on property taxes to pay for services, but a freeze is not the answer for real property tax reduction as was revealed in the floor debate.
Imposing a freeze on property tax increases sounds desirable, but taxes would still be allowed to increase under these plans due to new construction, bond repayment, and legal obligations. These bills did nothing to shift any of the cost of education back to the state where it belongs according to the constitution. Education makes up about 60 percent of most property tax bills. Nor did these bills encourage consolidation of units of government or agreements to improve efficiency in their operations.

The bills did nothing to relieve local units of government from state unfunded mandates that have been driving up the cost of local government. In addition, a freeze would require a local referendum every time there needed to be a tax increase for example to pay for storm damage or increases in salaries to teachers, firemen, or other government workers.

Missing in these bills were the tools that Governor Rauner has been mentioning that would reduce the cost of local government and therefore allow property taxes to decrease not just be frozen. The Governor’s ideas are actually being blocked by those who want to continue the high cost of property taxes and government operations.
The tax freeze amendment to HB 695 received only 37 “yes” votes out of 118, but was adopted. This was just another exercise to create campaign mailers telling how some legislators aren’t interested in property tax relief.

I will continue working for real property tax relief and solutions that will help rebuild Illinois. Have a great week.