The House version of a new school funding plan passed out of committee last week while the Senate version passed that chamber and came over to the House.  HB2808 and SB1 are very similar bills seeking to replace the current school funding formula with funding “best-practices” based on the students’ needs in each school.

As I have discussed before, there are four major components to each bill.  First, the Evidence-Based Model (EBM) looks at the social and educational needs of each student and determines the cost which is called an adequacy target for the school.  Next it calculates what each district is able to fund toward the adequacy target based on its property wealth and tax rate.

Third, EBM calculates how much the state is currently contributing to the district, adds in the local contribution and determines the district’s percent of adequacy.  Finally, the model’s distribution method allocates new state funding to those districts that are least well-funded.

Any time there is discussion about a new school funding formula there has to be a hold harmless provision so no district receives less than they are currently receiving.  Both bills provide such “base funding.”  Next, the Chicago Public Schools (CPS) want the state to pick-up its pension costs just like the state does for every other school district.

However, CPS does not want to lose its block grants that were established in 1995 because they receive about $252 million more in state aid than they should receive based upon student numbers.

You begin to see why some legislators feel the new model favors Chicago over treating every child in the state alike.  Neither of the bills offers needed relief from unfunded state mandates and high property taxes.  As a co-sponsor of the bills, I am still working on amendments to address these issues and to keep the focus on funding the best practices so every child improves each year.

You can follow along with the status of these bills as they proceed through the House legislative process here.

After months of debate and urging by House members, the Senate last week finally passed 7 bills in their “Grand Bargain” to solve the state budget crisis.  They also removed the “all or nothing” requirement that all the bills in the package had to pass before any of them could become law.

We have already discussed SB1 so here are brief comments about bills in the package that passed the Senate.  SB3 contains consolidation provisions affecting townships, road districts, drainage districts and county board authority to dissolve units that they appoint.

SB4 authorizes the sale of $7 billion in bonds to pay down the estimated $14 billion of unpaid bills.  The bonds would be paid back in 7 years at a cost of about $1.4 billion per year.

SB 6 appropriates a total of $11.5 billion to the State Board of Education for FY18 and additional FY17 spending.  Funding would cover the base funding level and add $288 million for the least equitably funded school districts.  Programs outside of the new funding model would receive nearly $733 million.

SB7 adds 6 casinos including one for Chicago, slots at race tracks, and changes to betting limits and rules.

SB16 provides comprehensive pension reform that requires Tier 1 employees to choose between two benefit plans, creates a new Tier 3 plan, makes funding changes, and offers a pension buyout option.  This bill is identical to HB4027 and HB4045 which are on third reading in the House.

Bills dealing with revenue, worker compensation reform and property tax freeze have yet to pass the Senate.

Homeschooling on the Rise in Illinois

Educating children is a full-time job and not everyone can do it.  Yet more and more families across the country are choosing to educate their children at home.  There were some 2.2 million homeschooled students in a recent count.

Last week, homeschooled students and their families visited Springfield to build awareness for the reasons they like homeschooling, build support for allowing this teaching option to continue and build a better understanding of the legislative process.  I had an opportunity to visit with the Brian and Kathleen Sell Family from Sycamore as they distributed cherry pies.

They mentioned many beneficial aspects homeschooling has to offer student learning and overall achievement success.  For them homeschooling offers the ultimate in individualized learning.  Lesson plans can be developed around the individual’s learning pace and more pedagogical approaches can be used.  There are fewer distractions and interruptions during class, and often more bonding between siblings.

Adults who were homeschooled have been found to be more involved in community service, attend public meetings, vote in elections and be more politically tolerant of differing views.

The Sell Family prefers the benefits of homeschooling 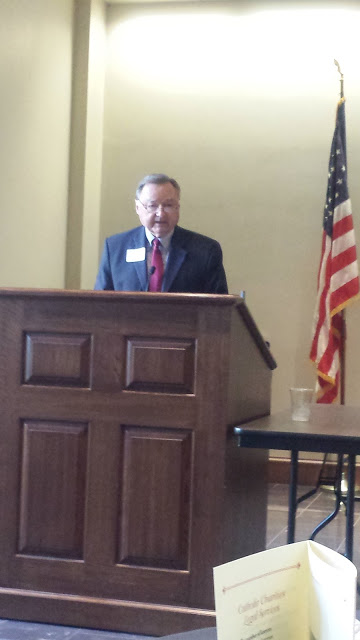 The Thomas More Legal Guild of Springfield sponsored their annual Red Mass ceremony last week for judges, lawyers, professors, law students and government officials.  The Red Mass derives its name from the red vestments worn by the clergy as a symbol of the Holy Spirit, whose guidance is sought for these public servants.  The ceremony also offers these officials a chance to reaffirm their commitment to the values and principles they have sworn to uphold.

The featured speaker, Chief Justice of the Illinois Supreme Court Lloyd Karmeier, discussed the moral and ethical application of the law, and its historical development.  The justice pointed out how the teachings in law school and laws that govern our society were built by the founding fathers upon religious principles.

He said basic social principles like fairness, honesty, concern for others and equal treatment come from Christian teachings.  The fact that fewer people are attending church and learning these principles contribute to the social conduct, political gridlock and failure to follow our laws that we see today.

The Thomas More Legal Guild of Springfield also provides legal help to low income residents in counties surrounding Springfield.  The cost of legal services has sky rocketed making them inaccessible to many and often denying the legal rights of individuals.

Looking Ahead to Memorial Day

Next weekend is a special holiday that honors those who serve, have served or died in service of protecting our freedoms.  Remember them with your thoughts, prayers and gratitude.