Observations and comments about state government by State Representative Robert W. Pritchard.
May 4, 2015

Rolling Up Our Sleeves
There’s an old expression we used on the farm that if you had a hard job, you should roll up your sleeves and get at it. That’s exactly what has been going on in Springfield this past week as bipartisan legislative working groups have begun meeting to discuss reforms proposed by the Governor’s ‘Turnaround Agenda’. The groups have met several times to negotiate things like tighter ethics laws, term limits, and workers’ compensation in injuries.
I’ve been involved in several layers of budget working groups from bicameral budget chairs meeting with the governor’s budget staff to ones with just House budget chairs and finally the topic specific full appropriation committees in the House.

Like the tough negotiations that occur between countries or over labor issues where the sides are far apart, progress must be measured in words and identifying the most basic areas where there is agreement. It’s a slow process when you consider the legislature is scheduled to adjourn on May 31 and the state’s fiscal year begins July 1.

Meanwhile legislators continue to be “schooled” in various appropriation meetings about the effects of cutting the budgets of specific programs and clients. The latest “schooling” will be the House Committee of the Whole on Tuesday to discuss worker compensation reform. I am concerned that this too will be an exercise to point out the reasons not to change rather than look at improvements that can be achieved.

Some Budget Cuts Restored
As I’ve mentioned before, the budget passed by last year’s General Assembly which ends on June 30th spent over $1.6 billion more than anticipated revenue. Governor Rauner upon taking office took immediate steps to cut spending to that level. Many of the cuts were very unpopular, but the only ones where money had not been spent this late in the fiscal year.

Among the cuts were $26 million for grants which support epilepsy and autism programs, after school Teen Reach, indigent burials, the Illinois Tobacco Quitline, and other human services. These programs got good news last week as the bipartisan Commission on Government Forecasting and Accountability released a report showing $300 million to 500 million more tax revenue than was anticipated. Hearing the news, the governor moved quickly to restore the $26 million in funding to these worthwhile programs.

The Governor’s Budget Director also announced that the 2015 budget is balanced and no further cuts will be necessary as some had feared. We were also told that any excess revenue at the end of the year will be used to pay down the $6 to 7 billion pile of unpaid bills. 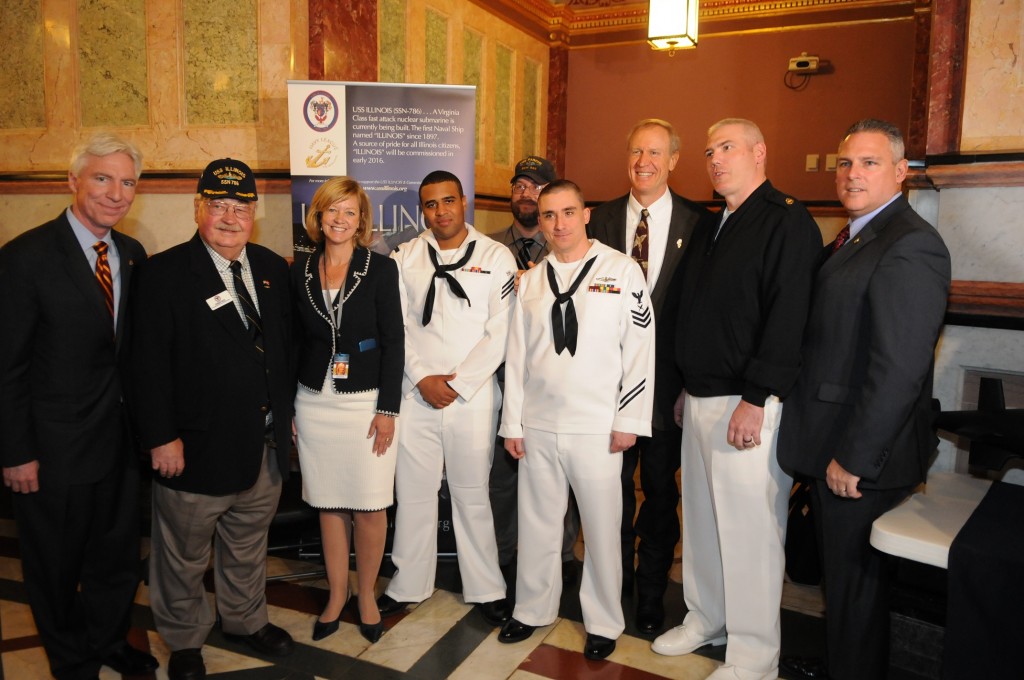 The U.S. Navy is preparing to commission the most advanced nuclear powered submarine in the world with the name U.S.S. Illinois. The sub has been under construction for over a year in Connecticut and is expected to be christened in October and officially commissioned in December. Sailors were in the capitol this past Wednesday to ask lawmakers to sponsor a voluntary income tax check-off to help fund the ceremonies surrounding the sub’s launch.
Friends of the “Illinois” have set up a committee to support the vessel and the personnel that have built and will man it. By custom, civilian committees like this one are responsible for much of the financial support necessary to celebrate the vessel’s launch and entry into active service. The last ship to be named after our state was a battleship commissioned in 1901.

DeKalb a ‘Best Community’ Finalist
DeKalb has been selected as a quarterfinalist in America’s Best Communities Contest, which is sponsored by Frontier Communications and DISH Network for communities with from 9,500 to 80,000 inhabitants. The 3 year campaign awards grants of over $10 million to support and encourages the transformation of communities and their long term growth.

By becoming a quarterfinalist, DeKalb will receive $50,000 and mentoring by a major national corporation to further develop their comprehensive community revitalization plan. Eight semi-finalists will be named next year and in 2017 three finalists will share $6 million after they have had time to implement their visions and plans.

Congratulations and best wishes to DeKalb as it works to keep the American Dream alive—demonstrating that with hard work and determination, it can deliver a better tomorrow for its citizens.

Advocacy in the Capitol 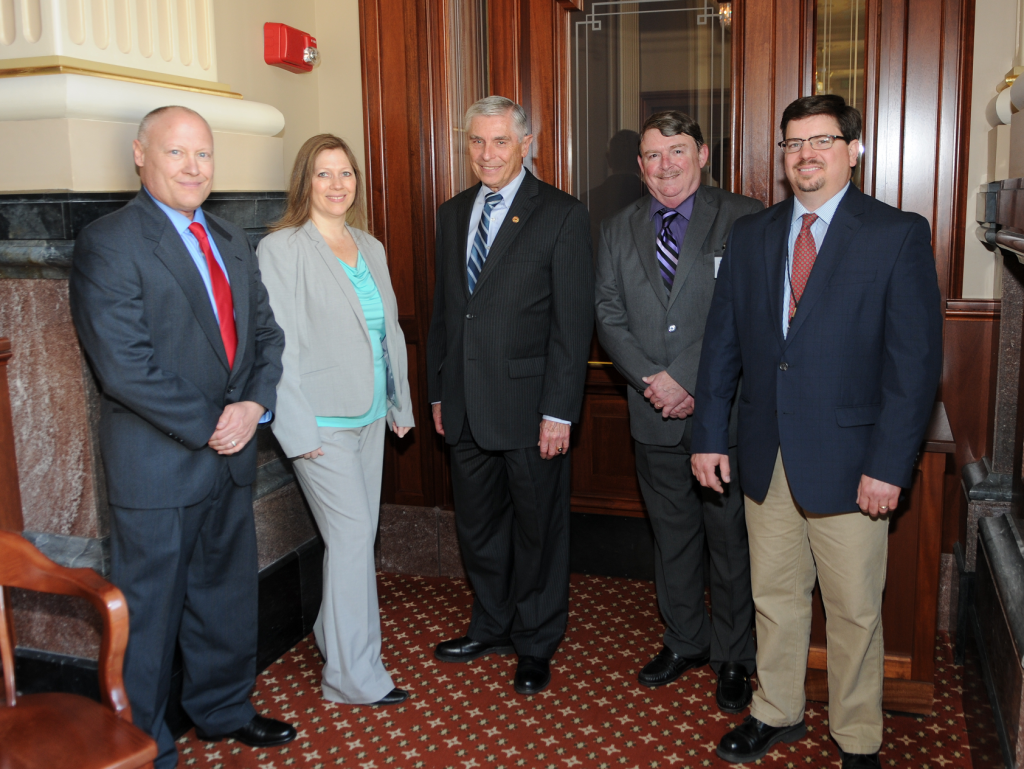 A number of organizations were in the capitol last week to renew acquaintances with legislators, talk about the budget for 2016, and review how they have used state funding. Participating in the Illinois Municipal League lobby day from the area were delegations from DeKalb, Campton Hills, Cortland, Hinckley, and Kirkland. In the picture I am seen talking with Hinckley’s Police Chief Gregg Waitkus, Office Manager Dawn Grivetti, Trustee John Marsh and Mayor Jim Roderick.

DeKalb Park District President Phil Young and Executive Director Jason Mangum were in Springfield as well last week to talk about the value of parks and the role they play in quality of life and attraction to a community. They noted that in a survey, 83 percent of residents say they have used a park program or visited a park or forest preserve in the past year.

Park districts also have a better public image than many other units of government and 7 in 10 people believe the portion of property taxes going to support parks represents a good or excellent value. Sycamore Park District is moving forward with its improvement and building plan after voters approved a tax rate referendum last November to support the plan, known as ‘Action 20/20’. The district is looking for citizen involvement in implementing the plan. 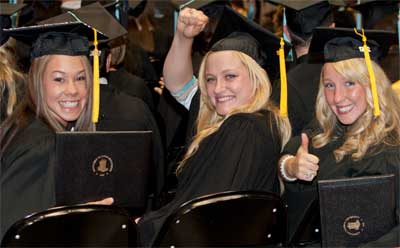 Graduation ceremonies will be occurring over the next month with one of the first being at Northern Illinois University this coming weekend. Whether from high school or college, graduation marks a significant accomplishment that according to statistics will return huge financial dividends and societal benefits. Congratulations to all the graduates and their families.

This is the fifth graduation class since Illinois adopted its Public Agenda for College and Career Success and it’s time to review the progress we have made toward our goal of 60 percent of citizens with some education beyond high school. The Illinois Board of Higher Education recently completed its assessment and while finding that Illinois has made improvements, we remain far behind best performing states at each step.

Illinois is closing the high school diploma gap between whites and minorities, especially in Chicago. The gap between the races is widening, however, when it comes to education beyond high school. Illinois is making strides in increasing the education level of its young adults. For older adults and especially low income students, the improvement remains behind the national average and most other states.

If citizens in Illinois are to compete for the types of good paying jobs available in the next decade, we must redouble our efforts toward achieving the public agenda (which can be found the website, www.ibhe.org). More of us–at all ages–must be graduating from a postsecondary education program.