“You Can Bring a Horse to Water, But…”
Governor Bruce Rauner is trying a well-worn strategy of calling Special Sessions to bring legislators together to pass legislation.  In fact he’s called for sessions each day until a budget is passed or July 1, whichever comes first.
Like the old time adage I learned as a youth “you can bring a horse to water but you can’t make it drink.”  Neither could Special Sessions called by Governors Blagojevich nor Quinn get legislators to pass the bills they wanted.
Governor Rauner, however, tried something a little different than his predecessors and on the eve of Special Session, he delivered a state-wide televised address to Illinois residents.  In it he explained the purpose of his proclamation and urged compromise and unity during the Special Sessions.
There was a sense of urgency as legislators returned to Springfield last week since most had been hearing about the need to pass a budget from their constituents and service providers while they were home.  Like all the Special Sessions before, however, the Speaker gaveled the session to order then promptly adjourned it.  No one was allowed to “drink.”
After the first few days of Special Sessions with no legislation or time for debate, the atmosphere got a little heated.  I spoke to emphasize the support and willingness of colleagues on my side of the aisle to work on a budget agreement.  You can see more of my remarks here.

Attention Drawn to University Challenges
Illinois universities were in the news this past week for the different challenges they face.  Northern Illinois University captured a lot of attention when President Doug Baker announced he would leave the University this week.  He came to the institution in 2013 with plans to build university relations with the community and focus the university on its core mission, strengths and opportunities.  He became embroiled in hiring decisions, his plans for changes and the lack of state financial support.
Acting President Lisa Freeman inherits more than the challenges of being the first woman president.  The faculty formed a new union in response to several issues including the lack of a pay raise in over 6 years.  Out-of-state universities are stalking key faculty with offers of more stability, job security and resources for their work.  Recruiting new students has become increasingly difficult as they look at lower tuition costs, program stability and better faculty moral at out-of-state institutions.
These challenges, however, are not unique to NIU.  I spoke out in the House last week about the damage being down to all our universities and colleges—public and private– due to the lack of a state budget.
I referenced a letter from the Higher Learning Commission to members of the General Assembly and state leaders which drew alarm that our institutions may face loss of accreditation.  The Commission is the oversight agency for 19 states that assures the quality of colleges and universities for students.
Lack of accreditation would mean students are ineligible for federal financial aid.
The Commission letter pointed to other impacts of not having a state budget:

I repeated my commitment to work together to find a budget agreement that will provide the necessary funding to higher education and with that, give the needed certainty that schools can continue to operate.  For NIU, I am ready and willing to help University President Freeman and the entire NIU community overcome these challenges and focus on ways it can improve the lives of students and support a growing Illinois economy.

ADM Announces Expansion in Illinois
With all the news of businesses leaving Illinois, it’s refreshing to see an international agricultural business expanding in our state.  Archer Daniels Midland Company (ADM) has been quietly investing more than $250 million to expand and improve its operations in Illinois.  ADM’s latest announcement is to build a new flour mill in Mendota.
The company said with increased need for flour by bakers across the region it will build and operate a plant by 2019 to grind soft and hard varieties of wheat that will come primarily from states west of Illinois.  As one of the world’s largest flour millers, ADM has multiple wheat flour mills in the United States as well as in Canada, the Caribbean, Central America and the United Kingdom.
Other ADM investments in Illinois over the past two years include new Animal Nutrition production facilities in Effingham and Quincy, and their new partnership with DuPont Industrial Biosciences to produce furan dicarboxylic methyl ester (FDME) from fructose.
Agriculture has remained a bright spot in the Illinois economy creating more than $19 billion of value each year.

Committee of the Whole Discusses Various Reforms
With the Speaker as yet unwilling to discuss budget issues while the legislature is in Springfield, he has filled time discussing various reform issues in Committees of the Whole.  One afternoon was devoted to Worker Compensation, another to the property tax freeze and on Saturday to elementary education funding reform.
The Worker’s Compensation hearing brought forth the concerns of businesses, insurance companies, and Illinois workers.  Members of the House listened to over five hours of testimony from four different panels discuss the complex issues.
Reference was made to the 2016 Oregon Workers Compensation study which found that Illinois has the eighth highest cost for worker’s compensation in the country.  Some of the testimony pointed out how businesses move out of state to take advantage of cheaper insurance costs.
Many legislators questioned if the higher cost of insurance is due to medical and drug costs, fraud or excessive insurance company profits.  Despite the different conclusions there does appear to be movement toward a bipartisan worker compensation reform bill to lower insurance premiums.  The changes in law in the 1980s and again in 2011 increased insurance company competition and reduced medical costs which had the effect of lowering insurance premiums.
As expected, the property tax freeze hearing pointed out the high cost of property taxes and how they are forcing many families to lose their homes and move out of state.  The number of local units of government that can tax citizens was cited as a major problem as was the state defunding of education which shifts the burden of paying for education to property taxpayers.
While none of those that testified believed a property tax freeze was the best solution to the problem of high taxes, it appeared to be a temporary fix for many legislators.  The Governor continues to call for a freeze as part of the budget agreement. 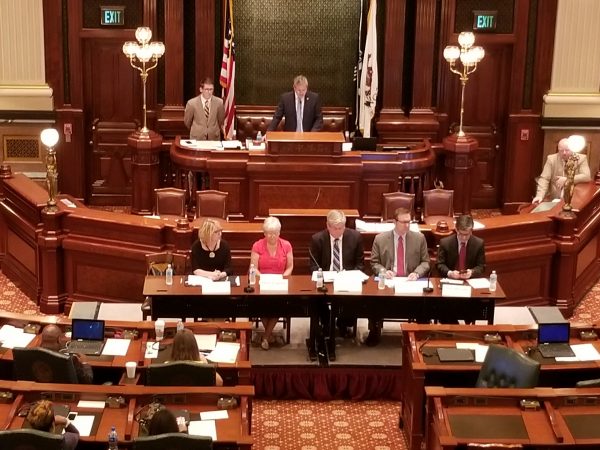 The final Committee of the Whole discussion last week returned to the much debated topic of school funding reform.  The Governor has threatened to veto SB1 when it is sent to him from the Senate because it treats Chicago schools more generously than other schools.
Two bills have been introduced in each chamber to remove the special treatment for Chicago and be equitable for all students in the state—SB1124 and HB4069.  Computer runs of the financial impact on each school district of the various bills (SB1 amendment 1 and SB1124 amendment 3) can be found on the State Board of Education’s website (www.isbe.net) or (here).  All of the models use between $288 and $350 million increased funding from the state to move each district closer to its cost of adequately funding the education for their students.
The debate centers on whether Chicago schools deserve the special treatment due to their political clout, student population, or financial distress.  Many point to the problems that Chicago schools are experiencing as self-inflicted due to the district’s size, the way they under assess and therefore tax residential property, under fund their pension system, and mismanage finances.
If no resolution to the funding reform debate is found quickly, schools will continue to be funded inadequately and inequitably under the old formula for 2018.

Veterans Invited to Join Advisory Council
My Veterans Advisory Council will be meeting next month and I invite anyone interested in veteran issues to attend.  The meeting is scheduled for July 24 at 6 p.m. in Sycamore.  We will be reviewing legislation affecting veterans, concerns about programs and services available through the State of Illinois—as well as give updates on issues discussed this year in the General Assembly.  Contact my district office at 815-748-3494 for meeting location and to indicate your interest in attending.
As we approach July 4th and the celebration of our freedoms, I thought it appropriate to point out a display at the capitol this past month.  There has been a photo display of those who have given their lives in the defense of our liberty in recent years.  I am standing by the image of Brian Slavenas, formerly from Genoa, who was killed in 2003.
The Traveling Vietnam War Memorial Wall will be in Sycamore from July 13 to 16.  The DeKalb County Veterans Tribute Group has raised funds and volunteers to bring the wall back to Sycamore as it was in 1997 and 2007.
The replica of the memorial in Washington, D.C. contains the names of over 58,000 soldiers killed during the Vietnam War including the names of 19 from DeKalb County.  I hope you take time to visit the wall and show your appreciation for those who defend our freedom. 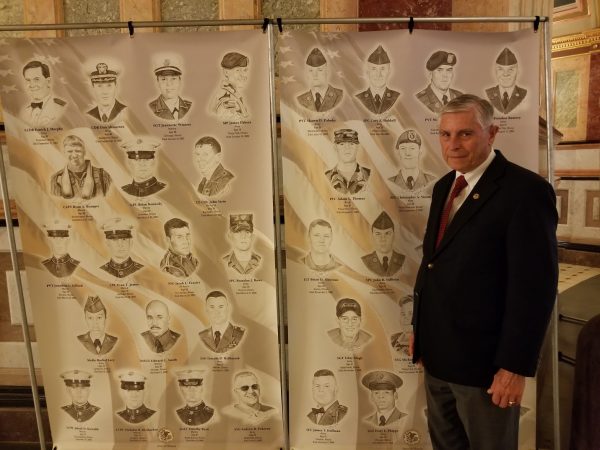