The news headlines read: “Through lack of available funds in the treasury unavoidable delays occurred in the payment of State obligations. As a result large sums of money were lost through failure of the State to take discounts. Even more serious was the prospect that lack of funds would compel the State to default on bonds and interest falling due on State bonded obligations.”

Sounds like yesterday’s news but it was actually from 1933. That was the year–in the depths of the depression– that Illinois switched from a state-wide property tax to the state sales tax. It provided a far more reliable income stream and more tax revenue which allowed the state to pay off its debts, provide unemployment relief to those effected by the depression, and fully fund education.

We need to come together in this time of fiscal crisis and work to find a creative solution to the financial problems of the state while providing a fiscal benefit to our citizens. Like in 1933, Illinois citizens are clamoring for property tax relief. I strongly believe we need to overhaul our tax code, simplify it, and tax activity not possessions.

Having been in the advertising business, I understand that communicating a message can be expensive, especially when the message is complicated. However, the Quinn Administration went too far in trying to convince citizens to sign-up for the federal Affordable Care Act and not embarrass any further President Obama and his signature legislation.

The governor’s staff authorized spending $33 million on the campaign which was among the nation’s most costly campaigns. It spent far more per enrollee on television ads than any other large state.

After getting a late start and facing intense pressure to avoid more embarrassment for the much-maligned law, Illinois officials last summer inked the most lavish contract in the history of Fleishmanhillard’s Chicago office. The goal was simply to get uninsured citizens to sign up for coverage.

More than 90 people, including executives from the firm and its subcontractors, billed at least $270 an hour for salary and overhead during the first four months.

Legislation to prohibit the use of ticket quotas by police departments in Illinois was signed by the Governor last week. The bill’s chief co-sponsor, a former Kendall County Sheriff’s deputy, led efforts to point out how some police departments use the number of tickets issued in a specific period of time to evaluate their officers’ performance rather than focus on their overall work.

Senate Bill 3411 would prevent ticket quotas at any state, county, municipal or conservation district police departments. The new law also prevents departments from looking at the number of tickets written by one officer compared to another with the same duty responsibilities. In floor debate the sponsor indicated the bill does not prevent departments from considering traffic citations as a part of officer performance evaluation.

Fortunately, this issue was not a problem in my district. I commend the work and judgment of officers in enforcing our myriad laws and focusing on public safety.

Illinois’ job growth continues to lag behind the national average and neighboring states. Our state’s unemployment rate in May was calculated at 7.5 percent of the work force, its lowest level since November 2008, but far above the 6.3 percent national average unemployment.

Illinois lost 11,400 manufacturing jobs over the last year, a decrease of 2 percent. Manufacturing output, however, remains strong as companies continue to incorporate technology instead of labor intensive processes.

Illinois’ job growth also has been affected by state policies, regulations and the attitude of state leaders toward employers. I have been amazed at the legislation which increases the cost of doing business in Illinois and the debate in committee hearings and on the House floor demeaning business contributions to our economy. All this must affect the decisions of companies to stay, expand or even come to Illinois.

With the death last week of former Tennessee Senator Howard Baker, we are reminded of his role in the Watergate hearings and his penetrating questions of White House staff about “what did the president know and when did he know it?” In the weeks ahead those questions need to be asked of Governor Quinn’s staff regarding his involvement and knowledge of distribution of $54.5 million for the Illinois Violence Prevention Program.

The non-partisan Legislative Audit Commission voted last Monday to subpoena seven of Quinn’s staff to testify on July 16 and 17 about the 2010 Neighborhood Recovery Initiative. Audit findings show a comprehensive failure by officials to comply with standard record-keeping procedures to track where the money, slated for community social work to reduce violence, went.

Reports need to be investigated that substantial sums derived from the funding for this program may have been distributed to well-connected political insiders, were not used to reduce violence and worse, just disappeared.

There are valid concerns that this investigation, like the Watergate hearings, might lead to a political cover-up. Senator Baker as Vice Chairman and leading Republican on the Senate Special Committee prevented that from happening and let the facts direct his line of questions. I hope the Democrats on the Audit Commission will follow Baker’s example and get to the bottom of the state’s latest fiscal improprieties. 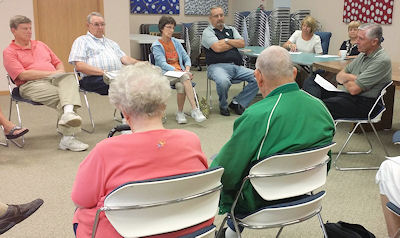 Thank you to all the citizens who gave up part of their Saturday morning to attend one of my four Town Hall meetings in June. While I hope you gained some background and useful information from the exchange, I hold the meetings because of the feedback I receive. I need to hear your observations, reactions and suggestions.

We spent a good deal of time talking about the actions of the legislature this year and how so many issues were directed toward the general election and turning out voters. As we discussed the constitutional amendments and advisory referenda, many in the groups were disappointed that the redistricting amendment will not be on the ballot this fall due to petition signature questions and a judge’s ruling the issue was unconstitutional.

As we talked about social programs and the cost to state government, comments were made that these programs too often seem directed to keep people dependent upon government rather than getting help to become independent and self-reliant.

Education funding restructuring proposed in SB16 elicited concerns that too much of the cost of education rests on property taxpayers. Not only are senior citizens forced out of their homes by high property taxes but also younger people are leaving the state to areas where the cost of living is more affordable. There continued to be concerns about the new state learning standards and how parents are not able to help their children with homework due to the new ways of teaching math. They suggested schools communicate more with parents and involve them in their child’s learning.

In several of the meetings, citizens expressed concerns that local boards are not trying hard enough to control expenditures and tax levies. There were concerns with legislation that increases the labor costs to build and repair public projects.

Many concerns and ideas were discussed-more than we have room to share here-but will be useful for me in the next General Assembly. If you would like to discuss issues or legislation, feel free to call me or set up a time that we can meet.

Not to let people leave the meetings feeling one party rule and unprecedented powers and tenure of the Speaker are impossible to change, I pointed to the general election. Citizens have a choice in the significantly different directions the Gubernatorial candidates will take our state. Having the Governor in a different party than the Speaker will change the dynamics of power, leadership and prospects for the future of Illinois.

Reading: Many families are already participating in our Summer Reading program, but it’s not too late to get your children and grandchildren reading this summer. As we enjoy the much deserved warmer weather don’t forget to take time out and “paws” to read! Find more Reading Club information here.

The research data is abundant that shows children regress in their academic abilities over the summer, especially reading. My reading club compliments your local library’s summer program and adds prizes and an ice cream party for those who read eight books. I also just read that new-born babies will grow up to do better academically when parents read to them.

Senior Fair: I hope you are looking forward to our annual Senior Fair in only two and a half weeks! New this year will be a shuttle service from the high school parking lot to the school front door and a speaker about Veteran benefits. Matthew Taylor from the Illinois Veteran’s Affairs will answer questions about veteran pensions and benefit programs, and discuss signing up for benefits.

Of course Senator Syverson, Family Service Agency’s Senior Center and the Voluntary Action Center are collaborating to sponsor the event. There will be nearly 70 vendors with answers to every imaginable question, free screenings, refreshments and door prizes. Don’t miss this convenient way to talk with service providers, and find help to stay healthier and live more comfortably and safely. Circle Thursday July 17th in your calendars and come to the fair from 9 a.m.-noon at DeKalb High School.

This Friday we celebrate our independence and I hope that amid the fireworks and barbecues you will take a moment to think about what Independence Day really means. I feel so fortunate to have freedoms of which other nations can only dream. Happy 4th of July!