Quinn Continues to Waste Time and Money
It’s often said that time IS money but the Governor seems to be wasting both in the pension reform debate.  His solutions for getting the legislature to pass fair pension reform are to huff and puff, and withhold legislator salaries.  Citing the separation of powers section of the Illinois Constitution, Associate Judge Neil Cohen ruled on Thursday that Governor Quinn’s attempt to withhold legislator paychecks until pension reform is enacted was unconstitutional.  The Governor is appealing the decision at significant public cost.

Like a lot of legislators, I want fair pension reform as quickly as possible to stop the growth of spending for pension obligations in our budget and to preserve an underfunded pension system for retirees.  Rather than join in pension reform discussions, the Governor continues to cause distractions and delays in those discussions with his antics.

Nevertheless, the Joint House-Senate negotiating committee appears ready to draft legislation for reforming the pension system.  Unfortunately they have not brought all parties to the negotiating table so their solution will likely lack the agreement and support necessary for passage.  The Governor could be spending his time bringing the parties together for a fair solution rather than filing court motions.

The much anticipated Illinois Health Insurance Marketplace is scheduled to open on the internet beginning October 1 for the purchase of health insurance required through the Federal Affordable Care Act (ACA).  If you are uninsured or buy your own coverage, you can enroll for health insurance through the marketplace for coverage beginning as soon as January 1.

This federal law requires all citizens and legal residents to have qualifying health coverage or pay a tax penalty.  If an individual has qualifying coverage from an employer or is a Medicaid recipient, they will not have to purchase health insurance through the marketplace.

Governor Quinn’s office announced on Wednesday that Illinoisans will be able to choose from several different plans based upon benefits and premium levels desired.  Information is trickling out slowly, but so far it has been announced that plans will be categorized as bronze, silver, gold and platinum, as the plans goes from least to most expensive.  Rates will vary by geographic location too, with Chicago being the most competitive and least expensive.

More information about the Health Care Marketplace can be accessed at www.healthcare.gov.  To review insurance plans, go to http://marketplace.cms.gov/getofficialresources/multimedia/multimedia.html.  Do not respond to an unsolicited telephone call of any kind, especially one that asks for personal financial information, personal health information, or money.  There is no fee to create a Marketplace account or enroll for health insurance through the Marketplace.

For the first time, low-income adults in Illinois who are legal residents may be eligible for health coverage through Medicaid, regardless of parenting or health status.  Illinois residents may qualify for Medicaid with incomes at or below 138% of the federal poverty level, which is about $15,860 for an individual and $21,400 for a couple.  In addition, former Illinois foster children ages 18-25 who were on Medicaid but exited foster care because of their age will be eligible for Medicaid regardless of income.  It is expected that an additional 500,000 to 700,000 people will sign up for Medicaid by 2017. Adults not eligible for Medicaid in the past should visit www.abe.illinois.gov beginning October 1 for more information.

ACA Fees and Taxes Accompany Implementation of Health Care Law
The federal law creates six new fees and taxes to pay for the health care program which include a “head tax” and fees included in the premiums for each of the four insurance categories.  One estimate calculates that for Illinois, the fees and taxes will total $100 million per year– far more than indicated when the program was approved.

For example, the Transitional Reinsurance Assessment Fee goes into effect on January 1, 2014.  Every person who has coverage under their employer’s health plan will be taxed $5.25 per month, or $63 per year.  The Insurance Carrier is required to collect the tax from the employer and remit the receipts to the Federal Government.  Each employer will have to decide if and how to collect the tax from their employees.

Unfortunately, too many people think of the Affordable Care Act as “free” insurance.”  As you see, there is no “free lunch” for taxpayers.

Genoa-Kingston Middle School Focuses on Leadership/Service
Last week I visited with 7th and 8th grade students from Genoa-Kingston to discuss leadership development, the importance of community service and the qualities of a good leader.  It was reassuring to see how the teachers and students were interested and engaged in developing the skills and actions that make good citizens.

Forbes Magazine has created a list of the ten best character traits of a successful leader.  Those traits include: 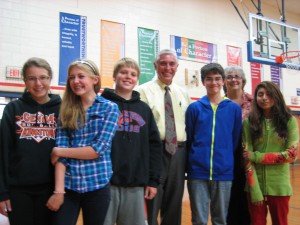 I was pleased to see banners in the school gym (visible in the background of the photo above) which stress many of these characteristics.  Congratulations to the G-K leadership, teachers and students for building strong pillars of character and citizenship.

Chicago Public Schools Overpaid in Grant Funds
Chicago operates differently than the rest of the state and education is no exception.  Chicago Public Schools (CPS) receive block grants for certain activities rather than getting reimbursement for services actually delivered like the rest of the schools in Illinois.  Two years ago the Legislature ordered CPS to begin reporting block grant expenditures and the preliminary data is very troubling.

According to the data from 2011-2012, CPS received $483.7 million in block grants for Educational Services like special education, busing, and breakfast/lunch meals yet only provided about $249 million in student benefits.  This difference of $234.7 million was either overpayment or services that should have been delivered.  Either way, taxpayers and the students of Illinois were shortchanged.

For the last 18 years, the CPS was not obligated to report Block Grant spending claims which made it very difficult for the State Board of Education to track the efficiency with which CPS was spending the money.  There were also instances in recent years when the CPS failed to comply with reporting that was required in the Illinois School Code.  It’s time the Legislature review block grants and assure school funding is allocated fairly and efficiently.  A few different proposals are currently being explored to remedy the problem.

DHFS to Appeal Arbitrator Ruling on Scrubbing of Medicaid Rolls
Several legislators met in Chicago on September 17 for a hearing that centered on the Quinn administration’s non-compliance with approved Medicaid reforms.  One key element of the reforms was a scrubbing of the Medicaid rolls to make certain that those receiving benefits met residency and income requirements.

The reform plan required the Department of Healthcare and Family Services to contract with an experienced private sector company to assure an objective review of Medicaid eligibility.  One of the State’s major public-sector unions objected to the hiring of a private firm, and an arbitrator subsequently ruled in favor of the union’s complaint.  DHFS is appealing that decision.

The private company found that well over half of the Medicaid recipients enrolled by state employees are ineligible for the program.  It would be a waste of the time and money already invested in the review to restart the process.  Furthermore, the administration should be scrubbing the rolls already so that scarce taxpayer money can be directed to the people intended.

Corporate Tax Disclosure Bill Resurfaces
There was a huge outcry when citizens learned their private electronic communications were being monitored by the government.  I wonder how they would feel if their tax records were made public.

The new bill requires publicly traded corporations and their subsidiaries to disclose certain tax information if they do business in Illinois.  Business owners and the Illinois Taxpayers Federation oppose the bill because they feel the proposed disclosure requirements undermine the traditional notion of taxpayer privacy and business confidentiality, while allowing business competitors to use the tax information to gain an advantage.

It is yet another example of a bill that would make Illinois a less attractive state in which to invest and create jobs.  I also fear that the passage of HB3627 would open the door to requiring similar disclosure mandates for small businesses and individuals.

Report Documents Wildlife Hunting/Trapping Public Areas
The annual report of the Illinois Department of Natural Resources (IDNR) documents a gain of 33,624 acres over the past decade in land open to the public for wildlife hunting and trapping.  The expanded area facilitates wildlife management and creates economic activity in our state.

IDNR reports the managed lands open to hunting and trapping last year totaled 396,428 acres.  DeKalb County had 484 acres near the Kishwaukee River and 776 acres near Shabbona Lake available for hunting/trapping.  In Kane County there were 415 acres available at the James Pate Philip/Heron Woods area that extends into Cook and DuPage Counties.  The report showed no acreage open to the public in Boone County for sportsmen to enjoy hunting or trapping.

Thank you to those who turned out for my town hall meetings over the past few weeks.  There was good discussion about turning our lemons (problems) in Illinois into Iemonade.  If you didn’t make it to one of these meetings, feel free to share your ideas when we meet at community events over the next week or by electronic means.  In the meantime, crop harvest has begun in our area so be careful and patient when you meet farm equipment on the highway.