Ring Out the New Year in Song

As many revelers get set to ring out the olde and ring in the new, one song has become a New Year’s tradition. Auld Lang Syne, set to the tune of a traditional folk song, is a Scottish-language poem written by Robert Burns in 1788. It is traditionally sung in the English-speaking world and other parts after the stroke of midnight on December 31 to say goodbye to the old year. It is a ritual of first singing the song, having a toast of champagne and receiving a kiss from that special someone. (The latter is why many older folks go to bed early—not that they are too old or don’t have someone special; they just can’t stay up that late.)

(NOTE: In the original letter to a lady friend the line
“And never brought to mind” was
“And never thought upon” but the above is what
Robert Burns sent to publisher for publication.)

Robert Burns was born in 1759 and died in 1796. He was also known as Rabbie Burns (pronounced Robbie) and the Bard of Ayrshire. He was a Scottish poet and wrote the poem “Auld Lang Syne” in 1788. Some of the lyrics were collated along with his own—the ballad “Old Long Syne” printed in 1711 by James Watson has some similarities in the first verse to Burns’—but most Scottish people always refer to Robert Burns as the original poet. He is widely considered Scotland’s national poet and is best known for being part of a group who wrote in the Scots language. 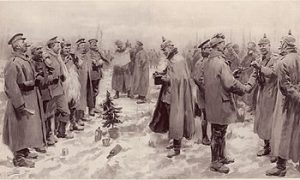 Although Auld Lang Syne is associated with New Year Eve, Auld Lang Syne is also sung to symbolize other endings or new chapters including funerals, farewells and graduations. Auld Lang Syne is also historically poignant as it was sung during the Christmas Truce at the start of World War I. For a short moment there was a ceasefire as troops from both sides left the trenches to swap souvenirs and sing songs. According to a letter from Sir Edward Hulse of the Queen’s Scots Guards, the British and German soldiers united to sing a number of songs, including Auld Lang Syne.

Every January, in areas throughout the world with Scottish populations, including Rockford and Chicago, there are formal Scottish dinners to honor Robert Burns.