The Egyptian Theatre in Downtown DeKalb recently received a $10,000 grant from the Douglas C. & Lynn M. Roberts Family Foundation. These funds will go towards the purchase of a new HD digital projector for the theatre. 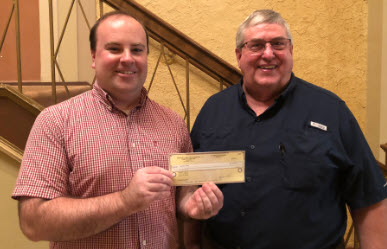 The current projector at the Egyptian is over 10 years old and needs to be replaced. Alex Nerad, Executive Director at the Egyptian Theatre, stated, “With over 20 movies scheduled to be shown this fall, a new projector will have a major impact on the experience film goers have watching on the largest movie screen in DeKalb County. Thanks to the Roberts Family Foundation grant we are that much closer to a new projector.”

Recently the Egyptian participated in Give DeKalb County on May 3 to raise money for the new projector. From 7 AM to 9 PM, the Egyptian Theatre staff conducted live interviews with local community members every hour on their social media sites. The fundraising goal for that day was $10,000.  The theatre was able to meet and exceed that goal reaching over $13,000. The theatre also received a $5,000 grant from the DeKalb County Community Foundations Community Needs Fund.

With a price tag of around $50,000, the funds for a new HD digital projector are still being raised.  With the help of this most recent grant, the current total in raised funds is $30,000.  The hope is that the community will step up to help raise the remaining $20,000 needed this summer so the new projector can be in place for the upcoming Richard Jenkins Film Series starting this September.

DeKalb native, Richard Jenkins, is an Emmy award winner and two time Academy Award nominee.  He has an impressive career in movies that started with watching films on the screen at the Egyptian Theatre in Downtown DeKalb.  The Egyptian Theatre is thrilled to honor Jenkins with a film series hand-selected by him featuring 9 of his favorite films that he has been in.  The series will run every Tuesday in September and October.  Films to be shown (in order) are: Dear John; Eat, Pray, Love; Flirting With Disaster; Bone Tomahawk; North Country; The Visitor; Step Brothers; Norman; and The Shape of Water.  Individual and package tickets for the film series are on sale now through the Egyptian Theatre Box Office.

The Roberts Family and Foundation are awesome!â¤ï¸

How generous and kind