Shooting Victim’s Father Helps Others Move Beyond Grief to Recovery

Back in 2008, Joe and Laurel Dubowski had a small, tight-knit family of four. Their oldest child, Gayle, was a 20-year-old sophomore at Northern Illinois University in DeKalb, IL, about a 50-minute drive from their home in Carol Stream. 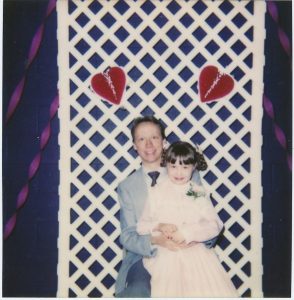 Joe Dubowski with his daughter, Gayle

But on Valentine’s Day that year, their lives took a tragic turn when a disturbed young man walked into Cole Hall on NIU’s campus and fired at the students seated in the lecture hall, killing five of them—including their daughter, Gayle.

Having to go to the hospital to identify the body of your only daughter is certainly the nightmare scenario for any parent, and the effects of those traumatic memories and the feeling of loss that they leave behind can be something that is understandably difficult to overcome.

Today, as NIU remembers that horrible event from 11 years ago and takes a moment to memorialize the victims, Dubowski reflects on how the tragedy altered his life and led to his ability to help others overcome losses in their own lives.

“As for this time of year, it brings back sad memories, for sure, but I don’t feel I have to live in the past or get lost in them,” said Dubowski. “I’m more concerned with living in the here and now. Things might be quite different if I had not learned how to complete my grief ten years ago.”

The painful events of February 14, 2008 led Dubowski to an awareness of being horribly unprepared for dealing with the overwhelming feelings brought about by sudden, unexpected, and unwelcome loss—a.k.a., grief. However, in the months and years afterward Dubowski learned some valuable lessons about dealing with and resolving those feelings. Consequently, he was able to heal from the traumatic effects on his life and adjust without many of the negative effects that so many people experience. And because of his gratitude for the help that he received, he decided to make a career of helping others deal with their own grief.

After years of working in software development and having been recently unemployed, he went back to college in his 50’s and earned a Master’s Degree from Northern Illinois University with a specialization in Marriage and Family Therapy in 2012. He now has his own practice in Wheaton, IL, focusing on couples counseling and grief recovery.

Dubowski still finds that most people he talks to do not even know that there are things you can do and actions you can take to heal from loss.

“Many people settle for what they see around them—learning to cope with the pain rather than keep searching for answers and healing,” Dubowski said. “And so I am occupied with that work of educating people and offering hope and a way to move beyond grief to recovery.”

Dubowski provides consultations with people to explore the possibilities with them for moving forward. He attempts to show them what they could gain from taking the steps that ultimately helped him, and what it would look like for them. And he offers to work with them, if they are interested, to help them recover from the trauma they are experiencing from losses and their effects on their lives.

He also published a book back in 2011, titled Cartwheels in the Rain: Finding Faith in the Wake of the Unthinkable, which is a personal account about his daughter Gayle’s life and death, and his own journey through the grief and confusion that followed.

Wonderful article Joe Dubowski and the work you do!

What an incredible man! Thank you!

I canât imagine your loss. Your new career may now help those folks who now need guidance in what you have experienced.