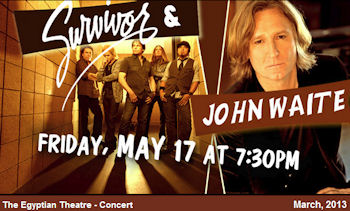 Legendary rockers Survivor and John Waite will be bringing down the house at the Egyptian Theatre at 7:30 pm next Friday, May 17 in a concert presented by the Egyptian Theatre and ProSound Productions.  They are offering a limited weekend offer, of Buy One Ticket, Get One Free! Hurry because it only lasts until 11:59 pm on Monday, May 13th. Big savings just in time for a perfect Mother’s Day gift! Discount pricing alert will appear in shopping basket after seats are selected. Choose ‘Buy One, Get One Free’ discount in the drip down menu before completing your order.

Formed in the cold Chicago winter of 1977, Survivor’s “Eye of The Tiger,” a song requested by Sylvester Stallone to be written expressly for Rocky III in 1982, shot the band to national attention. “Eye of The Tiger” spent seven weeks at #1on the Billboard charts in the U.S. and won a Grammy, received an Oscar nomination and was voted “Best New Song” by the People’s Choice Awards. Survivor’s 1984 album Vital Signs kept the band on the charts for over 40 weeks in 1984 and 1985, achieving multi-platinum status with a string of hit singles.   The album included Billboard Top 20 hits”I Can’t Hold Back,” “High on You” and “The Search is Over,” which reached #2 on the Hot 100.

For the first time in Survivor’s history, four original band members will hit the stage.  Chicago native Frankie Sullivan couldn’t “Hold Back” and has reunited former members of the band, including himself, both lead vocalists Dave Bickler and Jimi Jamison and drummer Mark Droubay.  Survivor’s concert at the Egyptian is the only chance in Illinois (out of Survivor’s announced US and European tour dates) to see these legends perform together!

Englishman John Waite has risen to rock fame as the lead singer and bassist of The Babys, as part of the super group Bad English and as a solo artist. The British group The Babys had two pop hits that each peaked at #13 on the Billboard Hot 100, 1977’s “Isn’t It Time” and 1979’s “Every Time I Think Of You.”

Waite’s 1984 solo album No Brakes resulted in international attention – and was a Top 10 Billboard album in the U.S. due to the smash hit single “Missing You,” which went to #1 on the Billboard singles chart. Click here to purchase your tickets!