Called the funniest farce ever written, Noises Off marks its return to Stage Coach Theatre this August during Stage Coach Players’ 73rd Summer season. Written by Michael Frayn, this comedy about producing a comedy will run from Thursday, August 1st closing on Sunday, August 11th. The members of an itinerant cast attempt to rehearse and perform an opening night and hopefully Broadway bound new play. 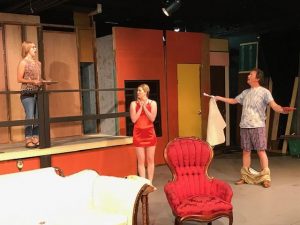 Noises Off is directed by Josh Smith, who made his directorial debut with Stage Coach Players in 2012 with Private Eyes. Smith made his Stage Coach debut performing in the dual role of Gary Lejeune/Roger Tramplemain. Asked what he wanted the audience to get from Noises Off, Smith said, “I’d like audiences to laugh and have a good time. Enjoyment is the number one goal of this production.”

The talented ensemble cast features Teresa Haish (The Dixie Swim Club), Mike Mattingly (California Suite), Bonnie Miller (The 39 Steps), Korey Miller (Calendar Girls), Chris Porterfield (Deathtrap), Larry Rapach (Laughter on the 23rd Floor), Jason Reed (Play On), Jessica Seip and Keely Smith (To Gillian On Her 37th Birthday). Bonnie Miller who plays the dual role of Dotty Otley/Mrs. Clackett echoed Smith, adding, “We have a wonderful group of comedic actors, a great director who truly understands how comedy works, and a fantastic crew. We can’t wait till we have an audience to come laugh with us!”

Having been produced hundreds of times over the years, it would seem that audiences have had plenty to laugh about. From a mob full of doors opening and closing, remaining closed when the actors want them to open and opening when the actors would rather have them closed, the pace of Noises Off is as fast as it is funny. “By the time we get to opening night, I am expecting we will be moving roughly the speed of lightning,” Mike Mattingly who plays the dual role of Frederick Fellows/Philip Brent, said. He added, “I hope the audience can keep up with us.”

Asked about the rehearsal process and working on a comedy that moves with such breakneck speed offered, “It’s a challenging script… You have to be able to focus on one thing at a time and then note and plan on what needs to be addressed later.”

To purchase tickets, visit our online website at www.stagecoachplayers.com.  You can also call the Stage Coach box office which opens Sunday, July 28th.  The phone number is 815-758-1940. Come join us and share in the laughter!