After being appointed to finish the term of retiring 70th-District State Representative Bob Pritchard, Jeff Keicher was sworn in on July 17, 2018. We spoke with him to get his thoughts on his first 90 days in office.

What’s been the biggest challenge of being a freshman representative?

“Your first initial steps are trying to understand the system and processes that are going to allow you to be most efficient. The biggest challenge is making sure I know where to go for resources and where those resources might be most helpful for the constituents in the 70th district.

“I got a call from the city of Genoa recently and visited with the mayor in person. They’ve expressed some deep frustration with the condition of Route 72 going through Genoa. I was able to find and talk to the correct person at Illinois Department of Transportation and we had some patch work that was being done within the next week.

“Just being able to navigate those waters and know the right person to talk to in government is already paying dividends.”

How would you assess the performance of Governor Rauner?

“I was very optimistic and hopeful about Governor Rauner’s turnaround agenda when he introduced it in 2014. There are still a number of very important points that I feel Illinois needs to do better on. While he hasn’t persevered, he’s also had Mike Madigan standing in his way at each and every turn.

“The budget stalemate was a two-person game. The narrative today seems to be all focused on that it was a Rauner issue. Even the budget that was passed is not a balanced budget. Those shenanigans that Mike Madigan had played as he got it to pass are a lot of the frustrations.”

How would you grade Speaker of the House Mike Madigan’s performance?

“He’s been Speaker of the House since 1984, with the exception of two years. There is an undercurrent of frustration, both within his party and within the state with his heavy-handed insider politics. He writes rules and enforces them with such diligent enforcement that people are fearful of crossing him within his caucus.

“As a Republican, the freedom that we have to voice dissension and to point out good governance techniques has allowed me to speak on those issues freely, where I know others in other races in the other party are not at liberty to do so.

“The first vote that’s cast in every new General Assembly, that I will cast in January when I win in November…will be against Mike Madigan as Speaker of the House.”

He is hoping that the Republicans gain the majority so that Jim Durkin, current leader of the Republican Caucus in the House, can become the new Speaker.

“Over the past two cycles, not including this one, Jim Durkin has taken the Republicans in the House from being a super minority, meaning Madigan had basically complete control, to gaining six seats against the Democrat, Mike Madigan’s  majority.

“There were 142 times during the last General Assembly this Spring where Jim Durkin and the Republicans were able to hold off bad Madigan legislation from getting passed.

“The bright spot I point out to people who have a lot of discouragement about Madigan being in charge is that the Republicans are only nine seats away in the House of Representatives in Illinois from turning it to a Republican majority.

“If we win nine seats this fall, we will be in charge in the House of Representatives and there will be a restored balance of power within that institution.”

He said he has been very heartened by the Black Caucus in the Democratic Party asserting that good legislation get passed. “I’m very optimistic on where that may lead in the next General Assembly,” said Keicher. 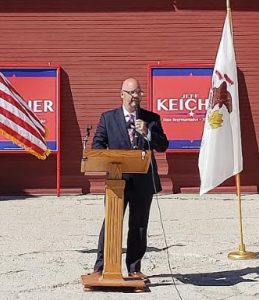 “The fact that’s often hidden is that 92% of the bills that come through Springfield are bipartisan bills. Very, very few of them are partisan in nature. The perception that we are polarized comes from a lot of the media outlets and the tunnel vision a lot of people have when they align party-only.”

He gave the analogy of husband-wife and parent-child relationships:

“Yes, we need less name-calling and partisanship. You see in some of the other races that are going on how the millions and millions of dollars that Madigan is pumping into these house races has turned it ugly with false accusations and that’s what we need less of.

“We need more dialogue. That’s been my life. I sit down with people, day-in and day-out, and help them solve their problems. We work through things. My primary obligation in my day job is the mantra that Stephen Covey had put out there, ‘Seek first to understand.’ Let me understand your paradigm. Let me understand your dynamic, before I start going through what I think the answer is, because I could be off base. We need more of that in Illinois government.

“If you look at the type of race I have run thus far, it has all been about my ideas and ideology. Everything that I’ve talked about has been about the plan and optimism that I have for the State of Illinois, for Northern Illinois University, for our farmers and our local schools and community colleges. It has all been focused on ‘What do I want to do?’ That, I think, points to the legacy I seek to create.”

What has been the biggest challenge of trying to run for office while being a new representative?

“The allocation of time between the two [serving in office and running] is a challenge. There are a number of things I had hoped to do on the campaign side that I haven’t had time to do.”

“A lot of the things that I’m doing on the campaign and in office are things that I have always done as a small business owner and a community leader. I’ve been on a number of non-profits. I’ve been on a number of boards. That, I’m doing anyway, because I’m out and about in the community. It’s not as if I’m coming from a different career where this is all new. It is about being a servant of the people. That’s what my background and career has led me to be anyway.”

What have you accomplished so far and what do you hope to accomplish in the future?

One of the things he feels very strongly about is getting input from the voters and constituents, so one of the first things that he did was holding “Javas with Jeff.” He went into each community and offered to buy people a cup of coffee if they came in and told him what was on their mind.

“[The talks] were very, very fruitful,” Keicher said, “I was surprised, because of the disillusionment that you hear so often, at how many people actually showed up. We had some very good, healthy dialogue and it was all very friendly and collegial.”

What he learned from the meetings is that there is a big concern with fair maps in Illinois. “In Illinois, we are gerrymandered horribly. That continued to come up time and again.” Consequently, he signed on to both versions of the fair maps amendment.

Property taxes and fear of taxes in general were also brought up by people frequently.

He also sent out a series of surveys to residents in his district and was amazed with how many people returned the surveys. “The people want to be engaged,” said Keicher, “So many of them had written on the side, ‘Thank you for asking. Nobody ever asks.'”

The top three issues people mentioned in the surveys were property taxes first, then good governance and education tied for second. “There is real anger at how Madigan has run things in the State of Illinois and created an insider politics game,” Keicher said.

One of the first things he did when he got sworn in was to decline involvement in the state pension and healthcare, because he doesn’t think it’s appropriate for legislators since they are part-time positions. For employees of the state, he sees no problem with them earning pensions, however.

He has no desire to allow the state to not honor its obligations to pensioners, and wouldn’t support an Illinois Constitutional Convention, at least until Madigan is out of power.

Going forward for new employees, because of the questionable nature of how Illinois has managed the pension funds, Keicher thinks a 401k-style system is probably better. 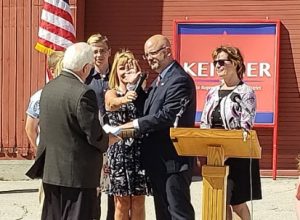 He’s a proud NIU alumnus who came through the Political Science department. All three of his siblings (he and his two sisters) are NIU grads.

He was raised by a single mother who was waiting tables to put a roof over their head when he was going to NIU. It was up to them to pay their own way through school. He got MAP grants and he lived with his grandparents in Sycamore while completing his degree.

“The opportunities that I got at NIU and the lessons I learned helped make me who I am today,” said Keicher. “That experiential learning and overcoming adversity is what we need to make sure the next generation of students get.”

He participates in and is encouraged by the NIU mentorship programs and has had dozens of NIU students as employees in his business. He said giving back to the university is core to who he is, because it has meant so much to him.

He is glad that the MAP grant program has been re-funded and is excited about the new AIM HIGH and NIU partner scholarships that will help DeKalb County high school students and Kishwaukee College transfer students attend NIU.

“I am so excited that NIU has its first female president in Lisa Freeman,” said Keicher, “What an amazing person to help bring that transformational change to the institution.

Keicher has some innovative ideas for NIU to deal with their enrollment issue, such as renting out empty dorm rooms to working students at a lesser rate or to commuter students on a nightly basis like, like Airbnb. He also would like to see NIU have a win-back program with discounted tuition for students who started college but didn’t finish. 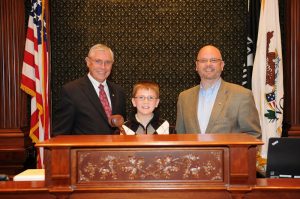 He’s also very excited about the Annie Glidden North initiative, as he thinks it is addressing some of the issues that have negatively affected the university.

On K-12 education, he would like to get rid of some of the unfunded mandates and rules governing our schools and trust teachers more so they can use their expertise to innovate.

“I love Illinois,” said Keicher. “I’ve got six generations of my family who have called Illinois home. I feel bad that people feel bad about living in Illinois and we need to change that.”

Here is a start: https://youtu.be/GaXOWTPfU_g

We will be interviewing Paul Stoddard and will get an article up soon. We don’t want to give the impression that we are endorsing one candidate over another.

Looking forward on what we can do to reduce Real Estate Taxes.