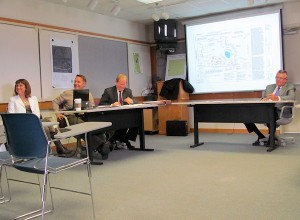 Stone House Park in Southern DeKalb County was again before the DeKalb County Hearing Officer Ron Klein for a new Special Use Permit yesterday, March 7th, 2013. Coming back with the name of Stone House Farm, new owner Daren Friesen is requesting a Special Use Permit to hold retreats for his Chicago based Yoga company, Moksha Yoga Center, host two or three small festivals per year and the occasional wedding, business retreat or other similar events. Friesen hopes to use the property as a retreat and sanctuary for yoga enthusiasts and will promote healthy living and organic farming.

Friesen stated that his yoga retreats would be open to all and encouraged DeKalb County residents to come and join in the events once they were reopened. His plans for the land are modest, including adding frisbee golf as an activity and temporary yurts (luxury tents) to house some of his guests. There will be no selling of alcohol and a strict quiet time. Late night disruptions were one of the neighbor’s concerns with the previous owners of the park.

“Late night partying and consumption of alcohol are not part of our overall goal of healthy living” stated Friesen.

The new owner is planning on investing money into the shower house this Spring, replacing the roof, electric and plumbing. He is also having an architect and structural engineer look at two of the barns to access the feasibility of bringing them up to code for occupancy permits this year. Fixing the oldest ‘banked’ barn and renovation of the historic Stone House, which was gutted by the previous owner, will wait until at least the second year of operation if not longer.

DeKalb County Planning, Zoning and Building Director Paul Miller said that zoning would be phased in over time, as the applicant wanted to pursue different uses for the different buildings he would need to come back in.

“Experience has taught us that plans change over time” said Miller.

Three neighbors of the property spoke at the hearing and stated that they had no problems with the plans for the park. Several members of the Spirit Gathering group who camped with previous owners and are hoping to come back also spoke praises of the new owner and his plans.

Hearing Officer Ron Klein wrapped up the hearing stating that he was going to send the application on to the Planning and Zoning Committee of the County Board with a positive recommendation. That meeting will be on March 27th. If it passes the committee, the Special Use Permit should be in front of the full County Board on April 17th at 7:30pm in the County’s Legislative Center.