Sundog IT Celebrating 30 Years in Business

On Thursday, June 20, 2019, Sundog IT of DeKalb, Illinois will be celebrating 30 years in business. Originally started in 1989 as TBC Net, the company has transitioned from a small shop doing odd jobs, to a commercial internet provider, to IT service and support.

Co-Founder and current President/CEO of Sundog, Cohen Barnes, took a slightly unorthodox path to running a successful technology company. At Northern Illinois University he majored in English, earning his Bachelor of Arts degree in 1995. Even though his degree was in liberal arts, he was heavily involved in technology. When he wasn’t working on literature, he was working on a car or a computer.

“Most of my memory of that time is technical related,” said Barnes, “what game I was playing, hacking the Windows OS, [and] trying to hack into Founders Memorial Library.”

After graduating from NIU, Barnes went to work for Micro Solutions, a now defunct technology company in DeKalb that specialized in portable data storage devices. During the day, he helped customers over the phone, troubleshooting whatever issues they were having. But at night he would volunteer by pulling cables and hooking up servers—anything he could do to learn from Micro Solutions Founder, Ron Proesel. “I spent as much time in that basement next to him as I could,” said Barnes.

In 1996, Cohen put everything he learned into practice in order to help turn TBC Net into the first commercial internet service provider (ISP) in DeKalb County. He also helped form DeKalb Fiber Optic in 2004 as a cooperative construction project with Northern Illinois University to install fiber optic cable connecting NIU and TBC Net’s data centers to existing fiber optic cables at I-88. Before Barnes left DeKalb Fiber Optic in 2012, they ultimately laid 140 miles of fiber around the area, connecting municipalities, schools, non-profits, and business enterprises. 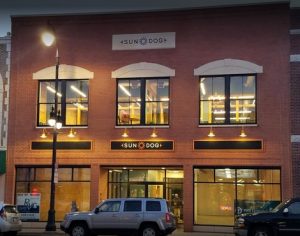 In 2014, TBC Net got out of the ISP business and rebranded themselves as Sundog IT. Then in 2017 they purchased the building at 230 E. Lincoln Hwy in Downtown DeKalb, which once housed Malone’s Department Store. The storefront had been vacant for two years since its last resident, Moxie, had closed, but Sundog rehabbed the building and converted it into their new, 4200 square foot corporate headquarters.

“We had every opportunity to move anywhere we wanted and could have done it for significantly less of an investment,” said Barnes. “But I’m a DeKalb man and Sundog is a DeKalb Company.” By renovating and revitalizing an iconic building, Sundog is doing their part to bring more traffic back to the downtown area.

Ultimately, Barnes said that he could not be happier with their decision to locate in Downtown DeKalb. He loves coming to work everyday in their new location and conveniently going to eat at Hometown Sports Bar & Grill, getting a pint at Tapa La Luna, or seeing a show at the Egyptian Theatre. He also enjoys participating with other downtown merchants for things like trick-or-treat days. They have even used their space for weddings and student art galleries. “Being in Downtown Dekalb is one of the coolest things I’ve done,” said Barnes.

In addition, Cohen Barnes and Sundog are heavily involved in the grassroots movement of #proudlydekalb, which is a community effort to celebrate all the positive things DeKalb has to offer through highlighting the city’s achievements and attractions.

As far as what has made Sundog successful, Barnes credits hiring the right people. “The crew that I have is just absolutely amazing and are performing at a high level,” Barnes said. In order to find the right fits for their company culture, they use a multi-interview process that culminates with the CEO sitting in a pub with the potential team members and getting to know them on a personal level.

“If I like you, what that means is you are going to be a fit with all of the other sixteen people who work for Sundog” said Barnes, “because we’re similar people—meaning really driven to excel, competitive, but also down-to-earth, good character people.”

According to Barnes, the most important thing that Sundog provides to their clients is peace of mind, through Security, Reliability and Competitiveness. From a security perspective, that means knowing their data and their bank accounts are safe. From a reliability perspective, it means knowing that whenever they arrive in the morning all of their computers are going to work well, so their people can always be productive and working toward achieving the organization’s goals. From a competitive standpoint, it means knowing they are technologically current in their industry and that the money they’re spending is going to help move their organization forward.

Sundog’s goal is to become the Midwest’s largest IT services provider. In order to make that happen, the four-person Sundog leadership team meets offsite quarterly to plan and to hold each other accountable.

“I owned 100% of Sundog, but I gifted 5% of the ownership in the organization to these three people because they’ve just been so critical to our success,” said Barnes. “I really can’t imagine ten years from now when we’re 50 people, to not have these people by my side.”