At the last DeKalb city council meeting I conjured up the Tax Revolt of the Great Depression as the last time the government actually lowered property taxes. The movement, nurtured through the cooperation of Chicago taxpayers and downstate farmers in Illinois and assortments of angry taxpayers throughout the country, was short lived but effective. The similarities to today are chilling especially at the roots: a system corrupted. 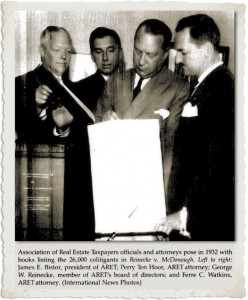 The Association of Real Estate Taxpayers, with a membership of 26,000 Chicago area taxpayers, led a property tax strike in the 1930s. Click image for enlarged view.

In the decade called the Roaring 20s local government had grown enormously in both size and scope. State and local government increased debt levels during the economic boom in order to finance construction and public works projects. Property taxes increased significantly and accounted for more than 90 percent of taxes levied by all cities over 30,000 in population.

The economy was booming, like it was at the turn of this century, and in such good times increased property tax revenues could be achieved simply through higher property assessments rather than higher tax rates. In times of shared wealth little attention is given to such details. Even less attention is given wasteful spending. But property taxes require a significant payment from the taxpayer. One that can’t be evaded without placing at risk what is, for most taxpayers, their most significant piece of property and wealth.

Much of that economic boom of the 1920s was credited to the 1921 “Mellonomics” tax cuts of President Calvin Coolidge’s administration. But while Coolidge’s taxation reduction policy was viewed as the catalyst for the “new era” an obscured effect was the enormous tax increases that took place at the local level. In a 1932 article for the Forum, Jay Franklin wrote, “For every penny saved in taxes at Washington five cents were added to his taxes at the City Hall and State House.” 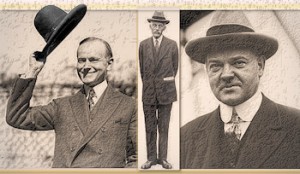 When the Great Depression became worldwide news with the stock market crash of October 29, 1929 a new awareness of the high taxes and wasteful government spending spread quickly. To pay down staggering debt accrued since the close of the first World War, President Herbert Hoover introduced a massive tax increase that Congress passed into law as the Revenue Act of 1932. Sales taxes were imposed on gasoline, tires, autos, electric energy, malt, toiletries, furs, jewelry, and other articles; admission and stock transfer taxes were increased; new taxes were levied on bank checks, bond transfers, telephone, telegraph, and radio messages; and the personal income tax was raised drastically.

As unemployment swelled to more than 24% and private sector income declined sharply public sector wages increased in actual dollars. The anti-big-government sentiment that predated the depression mushroomed to a hard line division between the Tax Eaters and the Tax Resisters.

The collapse of land values brought taxpayers to their knees. New construction fell 92% between 1929 and 1932. The debt service created during the 1920s prevented any inkling of property tax relief that taxpayers expected since their property values had declined.

An estimated 4,000 tax protest groups sprang up across the country. The courts were flooded with tax litigation cases. And property tax delinquencies steadily increased.

As the Depression progressed nearly every part of the country faced a breakdown in enforcement of the general property tax. The threat of the tax sale became hollow when defaults number in the thousands of parcels. Under those conditions there are no tax buyers because holding a tax certificate almost guaranteed that the investor would soon hold full title and all financial responsibilities for the property in question. 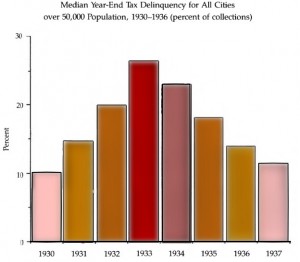 In Chicago matters grew worse. By the late 1920s, Cook County’s corrupt assessment system had become rampant with tax fixing for political favors. Elected officials and their cronies were granted lower tax assessments that had to be passed on to the remaining property taxpayers. This corruption was obvious and administered with arrogance.

Taxpayers struck back. The tax-resistance movement was received with widespread support. Impoverishment kept many from paying their property taxes on time. Soon members of the newly formed Association of Real Estate Taxpayers (ARET) began defaulting on property tax installments as part of an organized strike.

Chicago’s strike sent a chilling message to other localities of just how bad the tax revolt could potentially get. The percentage of unpaid taxes in Chicago reached 53.4 percent in 1931-32. In one of its court suits, Reinecke v. McDonough, ARET listed its entire membership, about 26,000 members, as colitigants. The list, over 7,000 pages long, not only featured the names of members but also their assessments, tax bills, and the locations of their properties.

In response spending was reduced as was the local government’s propensity to issue debt. Efforts to broaden the tax base to reduce reliance on property tax became more common. Almost no new tax was considered unless it reduced property tax. Several states established cuts and limitations on property tax rates. The movement was a success in terms of shifting the burden of taxes off of property, reducing the overall tax burden, and protecting taxpayers from future increased taxes.

Some argue that the Great Depression Tax Revolt was final straw in ending Prohibition.

“No nation ever can or did make itself prosperous by taxation. Taxes prey upon national wealth and industry. Governments do not produce wealth. They consume it.” — Ashton Shallenberger, 1932

“And the taxpayer, not content with thus ruining political science, added insult to injury by damning all its chief ornaments as thieves, and by swearing that he would never let them rook him again. His bellow was now for the most rigid economy, and he swore that he would have it if the heavens fell. There was no holding him while the fit was on him. In many American cities public expenditures were actually reduced.” — H. L. Mencken, 1933