The Burpee Museum of Natural History in Rockford is preparing to launch a permanent dinosaur exhibit that has ties to a number of past NIU student researchers.

The exhibit, “Homer’s Odyssey: From the Badlands to Burpee,” features the museum’s new teenage Triceratops. It will be unveiled at 10 a.m. Saturday, June 29. The exhibit will provide information on the dinosaur, dubbed Homer, as well as on his relatives. 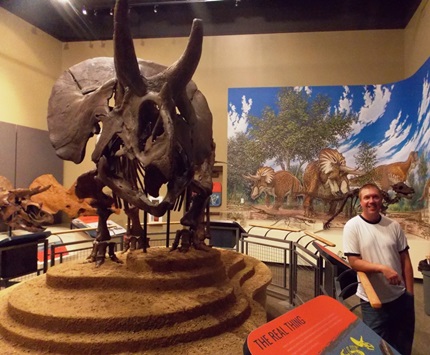 “Homer’s Odyssey” is the product of more than eight years of work – from the discovery of the first bones in the badlands of Montana to the preparation and reconstruction of the fossils in the NIU-Burpee lab at the museum, and finally to the development of the new permanent exhibit.

Josh Mathews, who received his master’s degree in geography from NIU, wrote his thesis on a study of the Homer site. He also was the lead author of research on Homer published in the Journal of Vertebrate Paleontology with then-Ph.D. student Mike Henderson (now an NIU instructor) and Scott Williams, a part-time NIU student and Burpee’s current director of exhibits and science.

Homer’s Odyssey: From the Badlands to Burpee“Our Homer exhibit does have quite a bit of an NIU connection,” Williams says.

“The Homer dig site has the distinction of being the first Triceratops bone bed ever found, and the work from the NIU research paper is featured in the exhibit,” Williams adds. “We also had NIU students in geology and anthropology who were preparators throughout the majority of the project.”

Homer’s Odyssey will illustrate what makes a Triceratops a Triceratops, how horned dinosaurs are related, how a Triceratops changed as it grew up and what Montana was like 66 million years ago. Visitors to the exhibit will interactive opportunities, including a chance to touch a real dinosaur leg bone.

Homer’s Odyssey complements “Jane: Diary of a Dinosaur,” giving Burpee one of the most comprehensive late Cretaceous exhibits. NIU students and faculty also were part of the 2001 expedition that discovered Jane, the museum’s prized juvenile Tyrannosaurus rex.

Admission to this museum is $8 for the public and free for members. For more information, call (815) 965-3433 or email visitorservices@burpee.org.
– See more at: http://www.niutoday.info/2013/06/27/teenage-triceratops-exhibit-debuts-at-burpee/#sthash.AlaNcbO3.dpuf