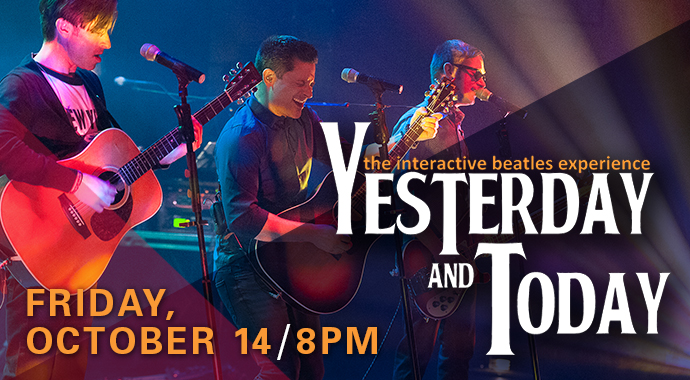 The nation’s most innovative and unique show utilizing the works of the Beatles Yesterday and Today: The Interactive Beatles Experience is coming to the historic Egyptian Theatre in Downtown DeKalb Friday, October 14 at 8 PM.

This amazing group, anchored by brothers Billy, Ryan and Matthew McGuigan, does away the worn out “tribute” format of bad wigs and fake accents. Instead, they perform as themselves and leave the song choices completely in the hands of the audience.

This is done through request cards that audience members fill out prior to the show. On those cards, the audience only needs to fill out three things: their name, their favorite Beatles song and the reason why they chose that song. The cards are collected and two minutes before the show begins, a set list is created based upon the songs chosen by the audience. As an added treat, the reasons that the audience members chose those songs make up the narrative of the evening.

Stars of Yesterday and Today, Billy, Ryan and Matthew McGuigan, originally from Largo, FL, were just 21, 18, and 15 years old in 1996 when their father, William McGuigan, passed away, after a difficult, but courageous battles with Leukemia.

Their father Bill owned every Beatles album there was…even the obscure ones. However, as a family, the McGuigans were quite poor. So, rather than going out to entertain the young ones, Bill stayed home with them and shared his love of the Beatles catalogue with his boys. Little did any of them know, it would turn out to be one of the greatest gifts a father could pass on to his children.

Now, almost fifteen years after the passing of their father, Billy, Ryan, and Matthew, have united their musical talents, charms and passion for performing to create the ultimate living tribute to the greatest man they’ve ever known. They now tour the country with the show, “Yesterday & Today”, which is a unique audience interactive concert experience, born out of the idea that everyone, like themselves, has a story or particular memory attached to the legendary music of The Beatles.

What the McGuigan boys have overwhelmingly found, since debuting the show in 2007, is that not only do people have a story to tell, but they are absolutely ready and willing to tell that story when being able to tie it to their favorite Beatles song. On some level, it goes beyond sheer entertainment, and perhaps becomes a hint of music therapy.

Every night the songs change, the faces change and the stories change. But one element always remains the same between the McGuigans and their fans. A mutual respect for why they are there. Whether it’s for the sheer love of the music, or to have a personal connection with it, either way, the McGuigan boys get to do what they love most – honoring the memory of their greatest hero, and the priceless gift he gave them so many years ago.

Reserved tickets start at just $25 for adults and $20 for students and seniors. Tickets can be purchased online at www.egyptiantheatre.org, over the phone 815-758-1225, or in person at the Egyptian Theatre box office.

The Egyptian Theatre is located at 135 N. 2nd Street in Downtown DeKalb, IL and is owned & operated by the 501(c)(3) non-profit organization Preservation of Egyptian Theatre, Inc..