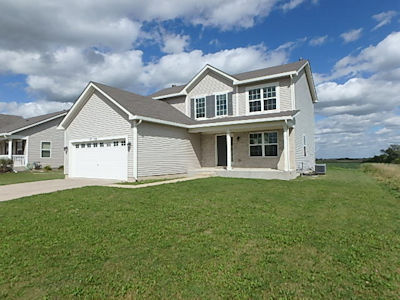 After almost two years of what at times were intense negotiations, attorneys for the Town of Cortland have forged an agreement with Cambridge Homes and the bond holder for the developer, and Wells Fargo, which has allowed the Town of Cortland to make immediate improvements in the subdivision, with more being planned to begin in Spring 2016.

In this Agreement, the Town of Cortland has received money that has been put in Restricted Asset Funds to be used exclusively for the necessary improvements to Richland Trails and the surrounding roadways. Those funds include $150,000 for Administrative Costs, i.e. legal counsel and engineering expenses. $181,289 to complete street lights, the repair and addition of sidewalks, necessary street signs and markings, and replacement and addition of parkway trees. $669,149 was received to complete road improvements on Cortland Center Road, to include the intersections at Charles Street and Aspen Drive.

DeKalb County has received $456,996 to complete improvements to Somonauk Road between North Avenue and Cortland Center Road to include the intersection with Meadow Drive. The Mayor has already had meetings with DeKalb County Engineers, Town Engineers, and our Public Works Director to coordinate these much needed improvements.

Also, as part of this Agreement, the Town of Cortland has taken possession of all the undeveloped lots in the Richland Trails development. Taxes had not been paid on these properties in over 3 years, as such; DeKalb County took custody of the properties. DeKalb County transferred ownership of the properties to the Town of Cortland. Costs associated with those property transfers were paid for by Cambridge and Wells Fargo.

Immediately upon reaching this Agreement, our Public Works Department, Water/Waste Water Department, and General Maintenance staff began overall cleanup and mowing of the properties Utilities have been appropriately marked and needed adjustments of some water valves have been completed.

As of the time of this writing, cost estimates for sidewalk work are being received and street lights and poles have been ordered. As part of these improvements all street lights in Richland Trails will be converted to LED lighting.

It is the Town’s intention to offer the improved and unimproved lots For Sale. It is the Mayor’s intention to have that money placed in a Restricted Asset Fund that will finance town-wide street repairs and maintenance.