Today’s DeKalb City Council meeting at 6:00 p.m. will cover many important matters, including swearing in of the newly-elected Aldermen, consideration of a request to extend the lease for Barb City Manor, consideration of a JRB recommendation to retire TIF #1 a year early, TIF requests from developer John Pappas and Safe Passage, and an ordinance amendment for Downtown parking regulations.

For the Complete Agenda for tonight’s meeting, see the document attached below.

Here are summaries of some of the important issues to be addressed at tonight’s meeting:

Consideration of a Request by Barb City Manor, Inc. to Extend the Current Lease with the City of DeKalb.

Barb City Manor, Inc. has leased the city property at 680 Haish Boulevard since 1979 and is interested in extending its lease for 20 years. The current lease was approved by the City Council on April 8, 2013 and remains effective until “the first to occur of (a) June 30, 2019; or (b) the date which is 30 days after the City receives the last payment of incremental revenue from Tax Increment Allocation Financing District #2 from the DeKalb County
Treasurer.” Such payment is expected later this year.

Consideration of a Joint Review Board Recommendation for the Early Termination of Tax Increment Financing District #1.

TIF #1 is due to expire in 2022, but the Council will consider a proposal to terminate it one year early in order to increase the funds the city has for development. Terminating TIF #1 a year early would generate an estimated $7 Million in surplus revenues in 2022, which is the equivalent of 16 years’ worth of surplus revenue for the proposed TIF #3.

Consideration of a Request from John Pappas for Tax Increment Financing Assistance to Redevelop the Properties at 204 N. Fourth Street and 423/420 Oak Street (former Mooney Property).

Mr. Pappas has presented the Community Development department with a conceptual development plan that proposes to raze the former dealership, mitigate known environmental problems, and construct two 56,000 square foot buildings with a mix of commercial retail and residential uses. Each building will have 10,000 square feet of commercial retail space on the ground floor and 38 one-and-two-bedroom executive suites on the upper floors. Each building would also include hospitality rooms, a fitness center, and outdoor terraces.

As of May 6, Pappas’ previous development, Cornerstone, was fully leased.

Consideration of a Request from Safe Passage for Tax Increment Financing

Safe Passage has asked for financing assistance to demolish the Former DeKalb Clinic at 217 Franklin Street and relocate a neighborhood sewer main. Safe Passage purchased the property in April of 2019. The property’s former operating clinic was closed in 2009, and the building has not attracted a profitable re-use since that time.

The five current properties owned by Safe Passage at S. Fourth and Prospect Streets will be sold upon the relocation and consolidation of Safe Passage facilities at 217 Franklin Street and will be returned to the tax rolls.

Michael Embrey is seeking the Council’s permission for an “encroachment permit” to allow for the random placement of two multicolored upright pianos on sidewalks near the intersections of Lincoln Highway and Second Street and Lincoln Highway and Third Street. The proposed permit would extend approximately from mid-May to October. The pianos would be unattended and available to anyone wishing to sit down and play them. Mr. Embry has explained that he borrowed the idea from Fort Collins, Colorado.

Resolution 2019-077 Authorizing an Architectural Improvement Program Grant to the DeKalb Area Women’s Center in the Amount of $3,250. 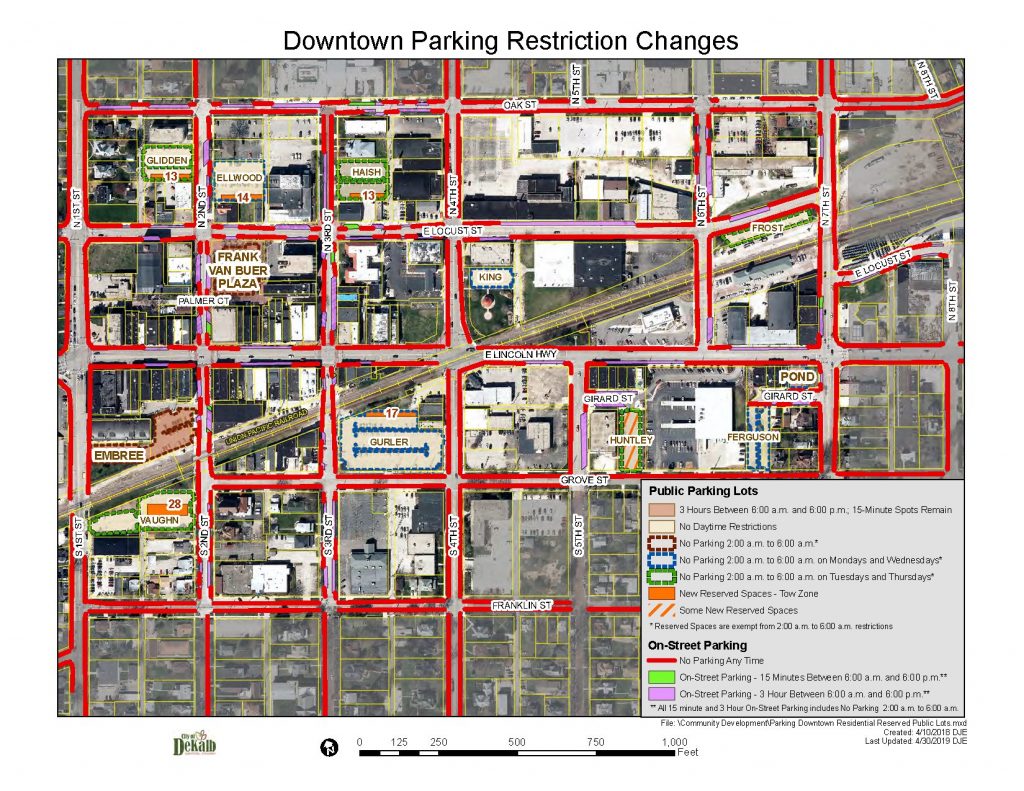 For over a year, the Council, the downtown stakeholders, and the City staff have been discussing possibly changes to the City’s downtown parking regulations. A number of public meetings with downtown businesses and residents have been held to invite thoughts and suggestions.

Most recently, at the Committee of the Whole meeting on March 25, the City Manager presented a summary of the opinions and recommendations gathered from this thorough process and public participation.

At the March 25 meeting, the Council consensus was to proceed with the following general changes:

b) Except for the Embree, Pond and Van Buer lots, the remaining nine public parking lots would provide unrestricted daytime parking. Overnight parking in these lots would continue to have alternating No Parking restrictions from 2:00 a.m. to 6:00 a.m. for cleaning and maintenance.

c) In each of the nine public parking lots mentioned above, a limited number of designated spaces will be available only to residents by permit. The cost of the resident permit would continue at the current annual rate of $75, which would guarantee residents unrestricted access to those spaces. The permits will be available at a pro-rated cost of $7 per month to finish the registration year. Alternatively, residents may still choose to park in unrestricted parking spaces in these nine lots on a first-come, first served basis but will need to adhere to the overnight parking restrictions.

To view the entire agenda below, mouse over the document and then click on arrows that appear at the bottom: