Tyler Hilton at the Egyptian Saturday 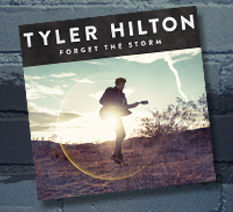 Tyler Hilton, singer, songwriter and actor, will appear this Saturday evening, May 12th, at the Egyptian Theatre in DeKalb. Showtime starts at 7:30pm. Tyler Hilton has been a songwriter and musician for most of his life. After releasing a self-titled independent CD, he signed to Warner Bros. imprint Maverick Records, which released his major-label debut The Tracks of Tyler Hilton the same year that Hilton made his acting debut starring as the musically talented but totally arrogant Chris Keller on the second season of One Tree Hill. Other roles followed, including playing Elvis Presley in the critically acclaimed Johnny Cash biopic Walk the Line, co-starring in the indie film Charlie Bartlett with Robert Downey Jr., and returning to One Tree Hill for its final season in 2012.

His new album Forget the Storm opens with a song inspired by his heartbreak over the music industry: “Kicking My Heels,” which his fans went crazy over when he premiered it on an episode of One Tree Hill. Though fans of Hilton’s strummy pop songs will find plenty to like on Forget the Storm, the album also charts new territory with two songs, the rockabilly-flavored, sexually charged “Loaded Gun” (which he wrote with country artist Deana Carter) and the untamed stomper “Ain’t No Foolin’ Me,” both of which Hilton is looking forward to playing live when he hits the road this year. “There are times when you just want to rock out onstage,” says Hilton, who has entertained audiences across the country both as a headliner and with such artists as Taylor Swift, Gavin DeGraw, and Goo Goo Dolls. “I play all kinds of styles of music in my show and the audiences seem to really love the rock and roll moments.”