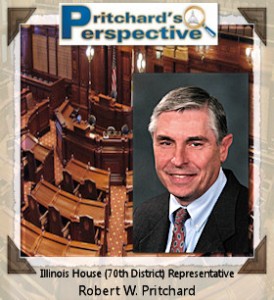 First-time visitors and even veteran observers of the General Assembly are often confused by the activity and legislative maneuverings.  That’s how the old saying that “making legislation is like making sausage” became popular.  Nevertheless there are rules to the process that are helpful to review.

The first step in the House of Representative process is the rules which were adopted last week.  This lengthy document spells out procedures, schedules and rights of members.  It also gives authority to the Speaker to control the process.  This past week Speaker Madigan’s immense power, accumulated over 26 years as Speaker and 8 years as leader of his party, grew even more.  Republican ideas for transparency, fair hearing of all ideas, and member’s right to appeal a decision of the chair were quickly brushed aside.

The road to a new law begins by submitting an idea for legislation to the Legislative Research Bureau (LRB) where the language and context in current law will be explored.  The draft is then filed by a legislator with the Clerk in his or her chamber.  The legislation receives a bill number and is posted on the General Assembly web site.  In the House, the bill is sent to the Rules Committee, made up of three members of the majority party and two members of the minority party, where it is usually assigned to one of 45 committees based upon subject matter.

I say “usually” because the bill may never be assigned to a committee if the majority party does not approve of the bill’s merits.

If a bill makes it to committee, the legislation is debated, citizens may give arguments for or against the idea, and a vote is usually taken of the committee.  Bills that receive a majority vote are returned to the House on second reading where amendments may be added.  When the bill is ready for full chamber vote it is read a third time, debate occurs and a vote is taken.

If the bill receives a majority vote, it passes to the Senate where the process is repeated.  Assuming the bill passes the Senate without changes, it is sent to the Governor who has sixty days to approve or veto the bill.  Bills that are vetoed or changed are returned to the originating chamber in the fall for a possible over-ride vote.  The process sounds simple until you add the spice of politics and maneuvering that makes the legislative process unique.

It’s just the fifth week of this General Assembly and already over 2380 Senate bills and 1587 House bills have been introduced.  I hope you stay in touch with your favorite organization that follows legislation and let me know your opinions about a specific bill that interests you.  Here are a few ideas important to municipalities and counties I gathered at a Local Government Caucus meeting last week.

Freedom of Information Act (FOIA) – We may soon see legislation to modify sections of the FOIA that are specific to commercial activities and children.  Companies and individuals are asking units of government for information that will be used for commercial purposes including use in litigation.  Others are requesting information about children who use parks and recreation programs.

Modernize Publishing Requirements – Units of government are required by law to publish in a newspaper certain information such as budgets, property assessments and tax increases.  A bill will be introduced to allow this information to be made available to the public in other forms that could save units of government millions of dollars in publishing costs and be more useful to citizens.

Employment Background Checks for Kids – Units of government are seeking authority to obtain criminal background information on juveniles prior to hiring them to work with children.  The governmental entities say they are concerned with the safety of children in their care.

Energy Infrastructure Modernization – Several bills are being introduced to change the utility regulatory structure in Illinois.  They seek to make it easier for utility companies to refurbish, increase capacity and add technology to the grid by updating how investments are approved and paid.