USAF Band of Mid America Monday at the Egyptian 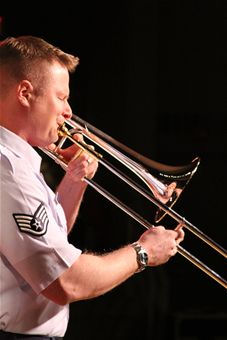 Come see the USAF Band of Mid America this Monday, March 12th,at 7pm in the Egyptian Theatre in DeKalb. The Shades of Blue Band will be hosted by local entertainer/musician Michael Embrey, a former member, musician, arranger of the US Air Force Academy Band/Drum & Bugle Corps. This concert is free and open to the public but tickets are required.

The United States Air Force Band of Mid-America Shades of Blue Jazz Ensemble is an 18-piece big band with a diverse repertoire of traditional swing, bebop, modern jazz, vocal selections, and the music of this great nation. During concerts, you may hear innovative, contemporary jazz works as well as the classic sounds of Count Basie or Glenn Miller. Several of the band’s members are also gifted writers and arrangers, and their compositions are often featured.Whether performing for a head of state, before a capacity crowd in northern Wisconsin, or for our troops at home and abroad, the Shades of Blue reflects the heritage and pride of our great nation and represents the excellence found every day throughout the United States Air Force.

Tickets are free to the general public.  There is, however, a convenience fee to secure your tickets online here. Those wanting to pick up tickets today can do so at the Daily Chronicle’s front office, 1586 Barber Greene Rd., in DeKalb or by calling FunMe Events at 815-756-1263 and your tickets will be put on will-call.