There is a desire to spruce up South Fourth.  A few weeks ago, Dan Kenney and DeKalb County Community Gardens began working with the Park District to deal with the Protano lot which is now owned by the City. Thanks to some good discussions and a commitment to make some positive changes to this brown field, it seems as if some type of prairie area might become a reality. This would beautify the site and bring attention to this part of DeKalb which is home to many service-oriented, long-standing businesses and other actively used facilities.

A day was set aside for clean up and several volunteers came forward and hauled out all sorts of debris. So many came to help that there was not enough time to gather names. Then there was the idea of adding a touch of color with raised beds filled with flowers. With the continued assistance from Dan Kenney and help from Ald. Scott McAdams, the planting of flowers was completed and it looks wonderful. 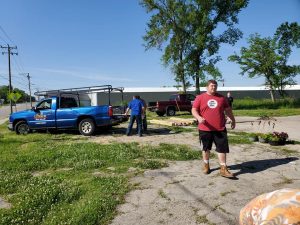 A special thank you to Aaron Robertson and Rob Roach from Hy-Vee who helped with donating the flowers, Andrew Meehan from RP Lumber who helped facilitate the donation of the lumber used for the beds, to Lowe’s for an additional lumber donation, to DCCG for providing soil and labor to the effort, and to Andy Raih from the City who has helped in a variety of ways with this entire effort. Of course there were the people who were the actual builders and planters: Chuck Faivre, Andy Small, Kyle Trumpy, Alex Manuel, and Matt Boelk.

Yes, many compliments have come forth from several people and the unbelievable generosity of volunteering from so many people is good reason to not only smile, but be profoundly grateful for the good citizens of our community.