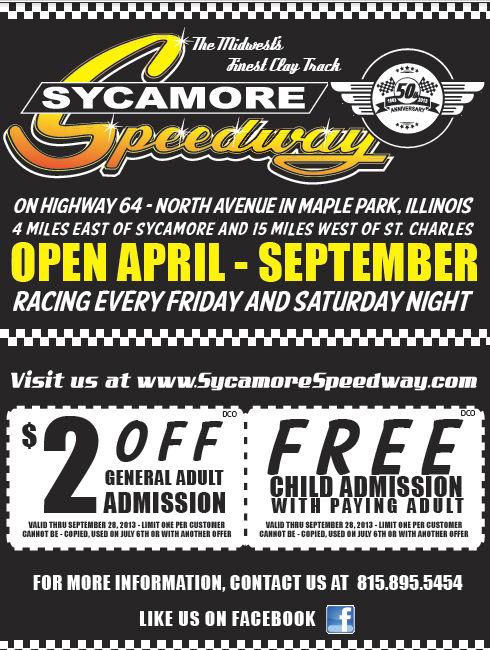 Sycamore Speedway had a special appearance last Saturday night by Tow Mater from Cars. The replica of Tow Mater was parked in the grandstands for folks to take their picture with throughout the entire evening on Saturday. There wasn’t a moment when Mater was by himself. The kids faces were priceless when they saw him. Tow Mater has agreed to schedule specific days when he will be at the speedway in 2014 so fans can plan accordingly to see him. The speedway has stated that there will be lots more special events like these for 2014 and maybe a few more yet for 2013 so become a fan on Facebook and enter their mailing list at www.sycamorespeedway.com.

As for the racing on Saturday evening, the boys and girls of racing put on a show. You can tell the season is winding up and everyone is looking for every point possible. In the Super Late Model Division, Charlie Olson of Kingston has locked in the 2013 championship. But in the Late Model division, there are 3 pretty strong contenders still battling it out. There are only 3 points between these drivers and it could be anyone of their championships. Tune in Monday at 6:05pm to 1360AM WLBK, to listen or talk to Tim Ludke & Jordan Jackowiak, who are currently only 1 point apart. Best of Luck to all of the Super Late & Late Model drivers as they head into their final point night for 2013.

For this coming weekend the Sycamore Speedway is hosting the final points night for their Super Late Models & Late Models for 2013 in addition, a Twin 25 Feature Event for the Late Models. Gates open at 6pm, Time Trials at 7:15pm, and Racing at 8pm. General Admission is $12 for Adults on Friday night, $5 for children ages 6 through 13 and for children 5 and under are FREE. Cash only. They hope to see you all at the races!