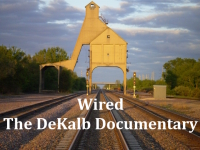 Come watch the Premire Showing of Wired: the DeKalb Documentary this Wednesday, September 12th at the Egyptian Theatre.  Wired; the DeKalb Documentary is a fascinating compilation of humorous, historical and heartwarming stories as told by over fifty residents of DeKalb representing every decade from ages eight to ninety-two years old. The film captures the essence of a community that has impacted many lives throughout its rich history and it’s present in an electrifying and unique manner.

The film is starring; the Lehan Family, Pizza Villa’s Finn Brothers, Rosita’s Rosa Balli, Joe Pasteris, Pastor Joe Mitchell and 50 more citizens of DeKalb! Red Carpet/Doors open at 6:30, seating starts at 7:00 and film Premiere begins at 7:30 Wednesday. Admission for the premiere is $5 for children, $8 for students and seniors and $10 for adults. The Egyptian Theatre is located at 135 N. 2nd St. in DeKalb.