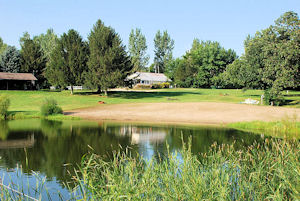 Daren Friesen is the new owner of the 37 acre property formerly known as Stone House Park, located in the southwest corner of DeKalb County. Closing took place this past Wednesday, February 6, 2013. The property was purchased on a foreclosure sale from First State Bank, who recently took over the old Farmers’ and Traders’ State Bank in Shabbona. Friesen has formed a new company called “Stonehouse Farm LLC” in honor of the property’s original name created by Helen Nesbit-Roberts, the owner of the farm from 1949 to 1990.

Friesen stated, “the property is one of the most beautiful recreational areas in Northern Illinois – containing a forest of old growth trees, a meadow, a lake, and Big Indian Creek running along the eastern edge. The property also has three barns, a general store, and an old stone house built in 1863, which is on the National Register of Historic Places, making this an important resource and attraction for DeKalb County.”

Friesen is the owner and director of Moksha Yoga Center in Chicago, the largest yoga center in the Midwest with three locations, over fifty teachers, and 10,000 student visits per month.  The center offers yoga classes, workshops, and teacher trainings.  In addition to yoga, the center also offers kirtans and concerts, nutrition and ayurveda classes and hosts the Blue Lotus Thai Massage Center at its West Bucktown location.  The yoga center was founded in 1999 and has 13 years of operational experience. 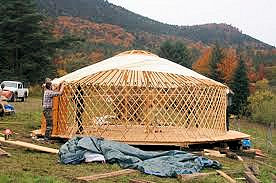 Friesen’s intention for the property renamed as Stonehouse Farm is to host yoga classes, workshops, and teacher trainings in a retreat setting. In addition to its own private retreats, the center also plans to host small-scale groups and festivals focused on conscious-raising activities such as yoga and meditation, ecology, sustainable-living, organic farming and nature preservation.

Friesen stated, “People in the city sometimes get really stressed with the rat race, surrounded cement and steel, everyone staring at their cellphones everywhere, and lots of traffic too. It’s our intention to bring small groups from the city to enjoy the natural beauty of the property, take a swim, lay out under the stars at night, and partake in healthy and conscious activities such as yoga and meditation during the day.”

Pending is the task of obtaining the Special Use Permit for the land since it is currently zoned as agricultural.

“And there are still other permits and licenses to obtain before opening for the season by the target date in late May” said Friesen. To help navigate him through this process, he has hired Kevin Buick, of the Buick & Foster [law group].

Friesen stated, “Kevin is familiar with the process and is highly respected in the community as a knowledgeable and astute lawyer.”  In his favor, the land has operated as a campground under a Special Use Permit since 1975. 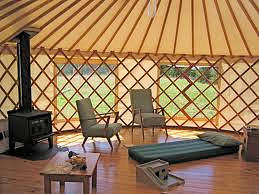 Once permitting is completed, Friesen’s next step is to build some yurts on the property, pending county approval.  Yurts are round structures originating in Mongolia.  A thick canvass material covers an accordion-like expandable frame that is topped with a roof.  Since the yurts are a type of luxury tent, Daren states they will be boxed up for the winter and used only for their summer events.

Friesen hopes with the new intention and usage focused on peaceful activities and the nature aspects of the property, that not only the neighbors, but all of the residents of the county will have a favorable view toward the new business. Watch for an announcement for a housewarming/neighborhood get-together soon.  Friesen stated that he welcomes any feedback or suggestions and to contact him at daren@mokshayoga.com.

I am anxious to see the peace this brings to everyone.

Like thank you Gracie man, I thought this was interesting and hope it is wildly successful. I noted your past history with the property.

Are there other interesting “where are they now” property stories like this in Dekalb?
(you don’t have to have owned them :). This could be your next book.

How about WHAT did happen to the FAILed ice skating rink equipment we bought, and was anyone local EVER hired as promised? What became of the old horse slaughter property?
Did the city ever realize any payoff from that “FREE” three fingered flip off logo that cost in excess of $50k to implement?
There must be some happy stories too, like some of the city property old gas stations etc that have become beautiful etc, I just don’t know them. Thanks man.